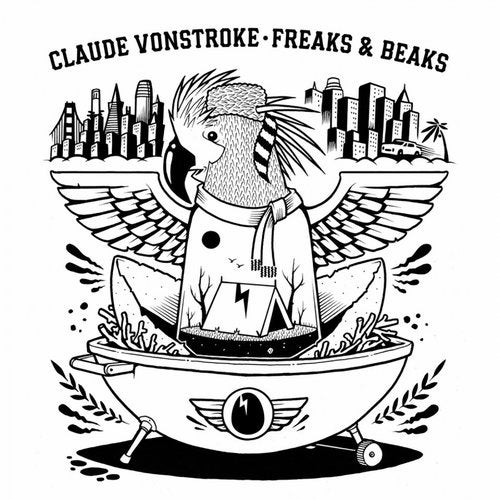 A lot can happen in 15 years. Few things manage to thrive for a decade and a half, especially in music. But a scrappy, left of center, Bay Area house music label, DIRTYBIRD, has managed to do just that. Claude VonStroke, DIRTYBIRD's founder, is marking this 15-year milestone the only way he knows how...working. This year VonStroke will throw two dozen-plus parties, three festivals, publish a coffee table book, release a seasonal clothing line, stage art shows, produce a documentary...and kick it all off by releasing a new album. The new album Freaks & Beaks is a celebration of quirky innovation and a relentless pursuit of something new and fresh, while hearkening back to the freewheeling spirit that inspired the launch of his label. This is an album that draws upon the inspirations of family, old friends, new fans and proper dancefloors. 'Freaks and Beaks' is the fourth artist album and sixth full length project from Claude VonStroke. He approached the album with a new process, including committing to daily creative time, experimenting with a lot of new hardware and having fun creating a huge amount of sketches. He made music on many levels of gear all the way from complex modular synths to simple drum apps on his iPad. Keeping it all DIY, he sampled his own voice and his two children on several tracks as well. He allowed himself to breathe while creating over 130 ideas, which were whittled down to the finished 11 album tracks. The music nods at the inspirations that underpin VonStroke's world, inside jokes between him and Justin Martin (FlubbleBuddy), unused experimental live sessions (Session A), vocal samples from loved ones (All My People), playful noodling on synths (Alpine Arpline), obscure French producers (Frankie Goes To Bollywood), championing new talent (Youngblood), irreverent self-aware humor (Birthday Messages) and genre inspirations that range from ghetto tech and drum n bass, to hip-hop and breaks. This is VonStroke's love letter to the vibrancy and genre diversity that have made DIRTYBIRD such a singular label. Dirtybird started as a free party, turned bedroom record label and has morphed into a truly thriving community, whose familial, fun and welcoming vibe has won over hearts and minds across the world. And while DIRTYBIRD has grown and evolved, VonStroke's core focus on music remains unwavering.