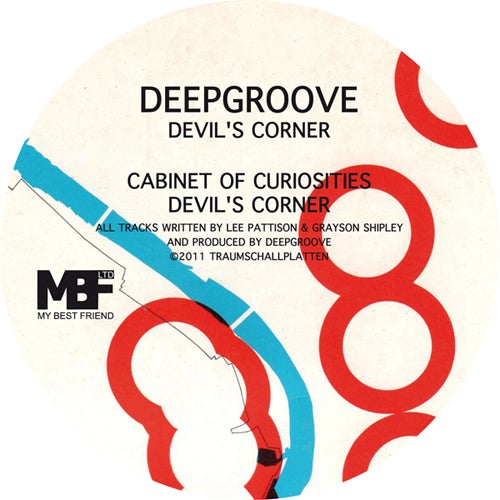 After recording a remix for Piemont (MBF) and another one of Max Cooper's Xircus track Rolf Harris, we are looking forward to releasing on our deeper imprint MBF LTD a 2 tracker from the Bristol based duo Deepgroove.Lee Pattison & Grayson Shipley aka Deepgroove are known throughout England for their eclectic DJ sets, bizarre and passionate at the same time.So we were expecting something's like sonic voyages and excursions into the unknown.Their release kicks off with Cabinet Of Curiosities which could be described as an adrenalin rushed discoid hypnotiser of a track.... tying together DJ Pierre and Carl Craig in on explosive bundle.Combining rhythmic loops with a lot of organic sounds and played passages, as well as haunting vocals, snippets and monsters tearing apart ping pong balls, synth sounds from pioneer days being smuggled in... we wonder, we really do... how Deepgroove have achieved to arrange all this in to such a stunning track.If you thought you were prepared for things to come you might be mistaken Devil`s Corner builds up tons of tension and leaves you in the dark of what will happen next. Skilfully Lee Pattison & Grayson Shipley create a kind of psychedelica with sounds, that never make it to the surface in a big way, but evaporate or are washed away.This track is a key track for DJs who know that a denial of direct euphoria can be the best that can happen to you when you play at peak time in a club.Devil`s Corner is a track that could go on forever benefits from that great rolling beat that Deepgroove have been so famous for.