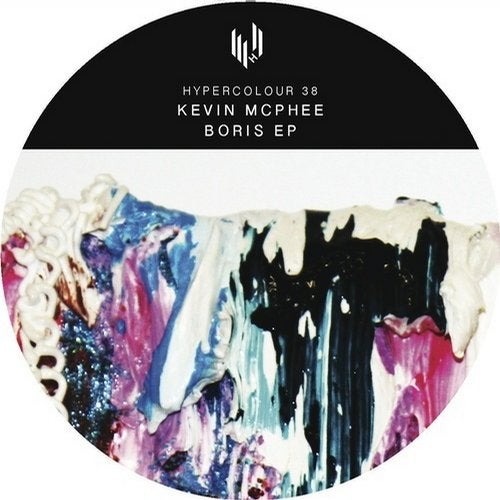 Canadian producer Kevin McPhee has already released an assured and consistent schedule of records since 2011, cropping up on strong independent labels such as Idle Hands, Demolition Man (with Gerry Read), WNCL Recordings and our own HypeLTD (2011s Blue Organ EP). So its a return to Hypercolour for Mr. McPhee, with the eBoris EP, with added clout from a superb Trevino Remix. The mechanical funk of eCC-XXX-YY-NNNNN opens the EP, its gnarly synth scratches go back and forth like a saw over the industrial clang, its sparse vocal the only sign of soul over this metallic techno winner. Trevino, AKA Marcus Intalex, has been rolling out some great music of late for Craig Richards The Nothing Special, Apple Pips and Martyns 3024, so its a real coup to get him on the remix for eCC-XXX-YY-NNNNN. Adding some ghostly pads and grappling with the vox, Trevino goes one deeper on the bassline whilst making the machines dance with plenty of hats and Detroit-esque bleeps, slapping on some nice melodic touches. On the flip, McPhees eBranch is a more minimal take on this industrial funk, a nagging horn stab rips all over a nominal bass and beats combo, the swing of the shakers locking down the solid groove here as percussion and claps tap away. Closing track eDD-YYY-ZZ-OOOOO is a great slab of darkroom techno, the spring reverb slapping the percussion around the chops as a taught string and stabs keeps things building over its eight minutes. A cracker of a techno record here from Kevin McPhee, showing off his versatility and style with ease.