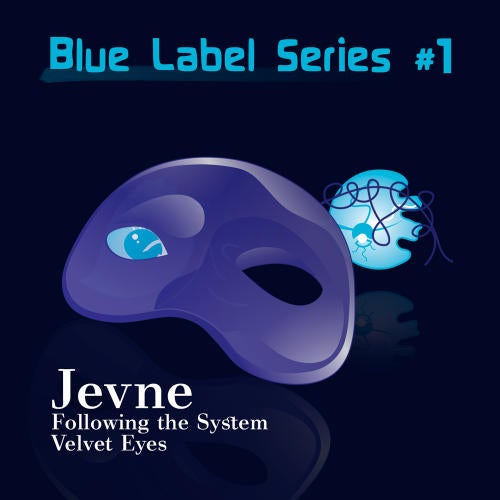 Eighth Dimension Records has launched its Blue Label Series, a continuing set of releases curated by Q-Burns Abstract Message focusing on eclectic, deeper dance floor sounds. There's no better way to start this party than with our bass guitar-slinging DJ friend from Minneapolis, Jevne. Arising out of the rave days of the early nineties to founding his quality-consistent Onethirty Recordings label Jevne has been a longtime active player on the American dance music scene. His previous appearance on Eighth Dimension was a superb remix of Beaters & Bowls' "The Stranger" and Jevne's also contributed to the catalogs of Chillin Music, Connected Musik, Conya, among others. In between constantly traveling the world as a DJ (often accompanying himself on the aforementioned bass guitar) and running his increasingly popular label Jevne found the time to record and deliver a pair of house music firecrackers for Eighth Dimension. Leading the charge is the club-ready monster known as "Following The System." There's a powerful groove here transported above the norm by funky staccato chords, melodic pads, and an echoed vocal hit serving as a call to action. It's a peak time track for the underground set, filling the floor with energy without getting too 'big room' on everyone.A track like "Following The System" demands the remix treatment so Jevne and Eighth Dimension enlisted a couple of skilled mutual friends who were ready for the task at hand. Switzerland's Da Funk, the prolific producer behind the Acryl Music label and a slew of remixes for the likes of Plastic City and Deepology Digital, is first on deck with a freewheeling after-hours excursion. Da Funk's Punto Rojo Remix is a hefty builder, anchored by insistent rhythms and pulsating pads, eventually climaxing in a stew of 303 bubbles and filtered swirls. The echoed vocal hit floats above the thick construction as if leading the way forward. A building mix of "Following The System" of a different sort comes courtesy of Lost My Dog head honcho Pete Dafeet. Pete's had quite the year with his label reaching its fifth year, marked by a highly rated CD compilation mixed by the man himself. Here Pete Dafeet's remix rides on an almost Detroit-ish foundation of drum machine and bass line, hypnotically pulling the listener in as elements from Jevne's original spaciously enter the sound-space. Warm, sustained pads rest underneath the signature vocal hit which is manipulated through additional echo and reverb treatments. A prime time basement jam, ready to be tightly mixed into a DJ's set.Jevne closes out this single with the 'b-side' bonus of "Velvet Eyes." Here's Jevne on a percussive breakbeat tip, experimenting a bit on top of a four-on-floor footing. Wild sounds and synth bits circle around the mix as we get a bit of Jevne's trademark live bass guitar holding down the bottom end. This is a sweet addition to the arsenal of a house DJ looking for something far from traditional, and a fantastic way to close out the first edition of the Blue Label Series. Be on the lookout for more volumes in the series coming right at you from your pals at Eighth Dimension.