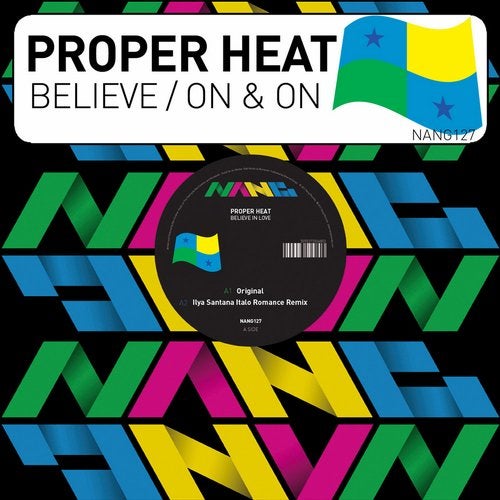 Winter is approaching and here at Nang towers, nights are cold and it's time to warm up proceedings. The heat is served in the guise of Proper Heat's latest temperate single with a flaming Ilya Santana's remix.

On 3rd of November we will drop the new EP from one of our favourite bands, Vilnius' Proper Heat. The trio has previously released 4 singles on the label, mixing lead singer Karolis Ramoska's incredible voice with Saxtone and Martin Vigin's producing skills, creating their unique style which goes from Italo to Cosmic Disco, from 80's Synth Pop to modern Deep House. On the 3rd of November they return with the double single 'Believe/On & On' backed up with remix from Ilya Santana, someone who has released on the likes of Permanent Vacation and Eskimo Recordings and remixed people like Human League, Dolly Parton, Lindstrom & the Phenomenal Handclap Band.

The EP opens with Proper Heat's 'Believe': a cavernous chord's melody introduces the track's dancefloor-oriented House groove before Karolis's lyrics kick in, merged with a deep rhythmical bass-line and smooth ethereal synth-lines. Ilya Santana's version of the original track is a proper Cosmico Disco cut. The producer takes the original chord melody and re-elaborates it, fusing it with spacey uplifting synths and and a jumpy arp/bass-line, dropping towards the tracks length the sampled and delayed vocals.

The second half of the single is composed by Proper Heat's 2 different versions of 'On & On'. The first version is a Pop light-headed track, carried by Ramoska's unique voice, while the second is a down-tempo re-interpretation of the original, in which a funky bass-line and groove are mixed with bossanova percussions and sexy soulful key-melodies.