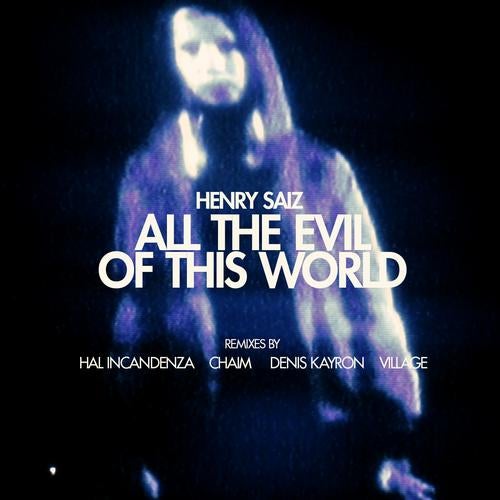 Out of the midst of winter, Henry Saiz emerges with the first works from long awaited and soon-to-be-heard debut LP, Reality Is For Those Who Are Not Strong Enough To Confront Their Dreams. The single, 'All The Evil Of This World', provides the perfect balance of both dark and light a combination that is so prominent across the forthcoming album. As part of a 2-year album production process, 'All The Evil Of This World' is not only a stand-out single from the LP, but it also provides the bridge into a new direction for Henry Saiz, as he gets set to embark into new territory as a musician. As a Madrid-native, Saiz is part of an exciting electronic generation in Spain, where alongside talented peers such as John Talabot and Pional, a new breed of artist is rising to the top. Having already carved out a successful career as a touring DJ/producer for some of the biggest electronic labels in the world, this new project is being self-released and is very much an exploration in sound and the format in which an electronic album can be presented. Specialising in analogue-driven, pulsing house-meets-futuristic-pop combined with field recordings, deep atmospherics and a tempo that focuses just as much on a listening experience as it does a dancefloor, as Henry puts it himself, 'I believe that electronic music can, and should, have a message. The infinite palate of sounds and textures give the power to evoke much more complex feelings and mindscapes than the traditional pop-rock instruments the fact that you can dance to it in a club doesnt mean it cant transmit a message (and a thrill) to the listener on many levels'. Featuring six different versions, from remixers including Chaim, ViLLAGE, Denis Kayron and Henrys own Hal Incandenza alter-ego, get prepared for the first of many new listening experiences to come from Henry Saiz in the coming months. Early supporters include Tiga, Switch, Alan Braxe, The Magician, Hernan Cattaneo, Dubfire, Inxec (Crosstown Rebels), Mighty Mouse, The Knocks, South Central, The Supermen Lovers, Nick Warren, Eelke Kleijn, Matt Walsh (Turbo), Amtrac, Nick Thayer (OWSLA), Darin Epsilon, Jerry Bouthier (Kitsuné), Chris Woodward (Buzzin Fly), Guy J and Benoit Carretier (Tsugi).

All The Evil Of This World