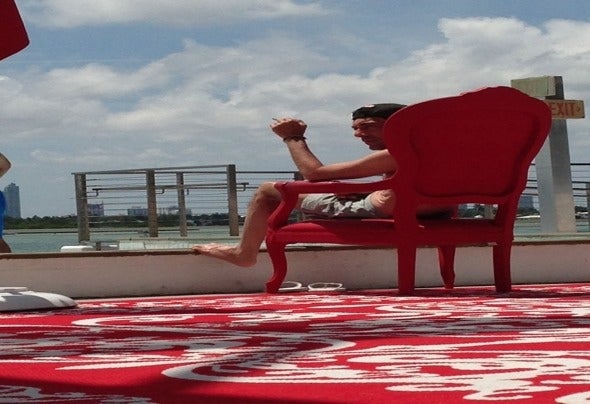 T homas Damiani is born do not know when , or where , or how , or especially why.The answer to this question comes up in the '80s, when the booming local radio Thomas takes the first steps in the music world .The first big break came with the legendary Peter Flowers Radio station in Milan.where Thomas has the opportunity to present the greatest hits rock with the grit and the stamp that mark from always. Simultaneously began his experience in the world of club scene.ODISSEY 2001, the clubs International of Milan and especially the more trendy ROLLING STONE .With Chicco Secci , his mentor refines the dynamic mixing in the implementation of programs for Radio Deejay .During this time Thomas decides to fly to the States, a key to understand and learn the best techniques and formats most popular of the American networks , and among others, has the opportunity to meet the teacher Wolfman Jack , the legendary " Lone Wolf " . Back to Italy , in 1990 T homas was called to RTL102.5 ,where he worked for some years with always hear growing.Thomas Damiani in the late 90 become a dj producer and realized as a series of records dance for important italian and international labels and the record "E tardi",enters the ranking of the dance club in Japan.At Radio Station One has directed various programs, but especially one of these is imprinted on her skin, we're obviously talking about Spin program created in collaboration with the magazine of the great Quincy Jones, at the same time leads to different radio show with Francesca Faggella , Marco mazzoli , Manuela Doriani .The next step is the leap to Capital Radio , where he leads Fun Capital , the afternoon program of music and news ... pure enthusiasm !!!! For Malvisi network conduct and writing " overload" the flagship program of the station with news dance and house .In 2007 the scream continues on Energy 98 & 2 New Hit Radio , and in conjunction with various web radio of international companies .2007 is a symbolic year for the career of Thomas Damiani , who earns the title of Music Consultant for the image.Always as background to his work, and more than ever as the main activity in recent years,Thomas damiani upsets the best clubs and disco in Italy; Shocking milan, Pepero Baija sardinia , MADAME SISI''desenzano , BOBADILLA bergamo,FIAT CAFE'' milan,BULGARI ST ORE milan , AVILA piacenz a,ALCAT RAZ milan, MEDIT ERRANEE varese , NOIR milan, PIPER roma, LA SELVAlake maggiore, ARENA LIVE lugano, AQUARIUS zagreb. Also DJ sets for some editions of the FAIR OF RIMINI FITNESS, DJ sets for the famous CARNIVAL OF CENT O and Milan.Currently White cat recording and production of the artists jl Afterman thomas damiani is releasing several mix with important feedback on the charts of Traxsource and Juno dawnload .Thomas Damiani plays HouseTech House and a shocking mix of house history.It is said that when Thomas is in the console , people will stick to the chandeliers .Is it true?