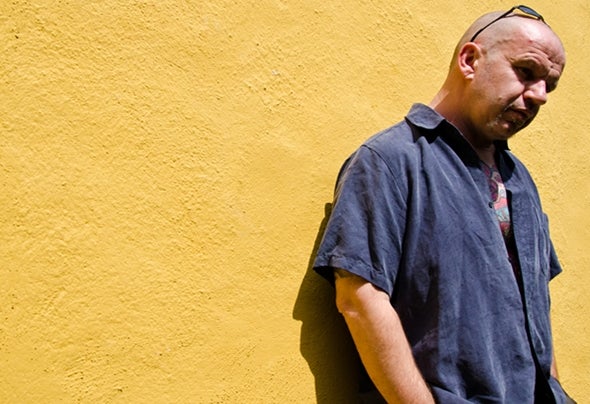 With a list of credentials as long as a laser beam, OICHO aka David Harrow/James Hardway/Technova has been neck-deep in the electronic arts for the greater part of his life. This multi-talented producer has been based in Los Angeles for the last 10 years scoring independent movies and working quietly in the background of this city's emerging electronic music scene, with artists such as DJKentaro, Jakes/Hench, BusDriver, Nocando, at his custom built WORKHOUSE recording studio. Strolling distance from the now legendary LowEndTheory night club, where Harrow has often been seen socializing and where he debuted an exclusive multimedia OICHO set. Elusive yet always on the cutting edge, David has been making records since 1984. Producing, performing, remixing, and arranging for the likes of The Orb, ATR, Anne Clark, Lee Perry and Dreadzone amongst many others. This busy artist has been flipping fat beats all over the world in a wide variety of sounds and styles for decades. From defining new wave classics and moody dance music to hard-hitting techno and swinging Drum n Bass, David Harrow has left an indelible mark on electronic arts culture and brought together artists and fans with his keen production skills. After dozens of releases and decades in the business, 2012 sees this versatile artist cultivating a new outlet for creative expression: video mapping. OICHO’s cutting-edge multi screen projections, originally created as visual accompaniment to his own live performance, have made him one of the go-to guys in Los Angeles for this fresh new type of video art. A form of spatial media, video mapping projects mutating images, shining hallucinations and brilliant displays of color onto nearby surfaces (such as bass bins) for a thrilling multidimensional experience of digital art. OICHO has been on eye-popping duties for the Los Angeles events hosted by Pure Filth, one of LA’s top underground crews known for saturating the senses with thick and heady shows. Also on the visual tip for Thavius Beck’s Ableton workshops at the Downtown Independent, as well as 3 nights at Coachella and at UCLA’s Summer Nights with the Hammer Museum. OICHO is in high demand as more and more promoters and venue owners realize the hugely positive impact of video mapping and other exciting visuals on the experience. There is no doubt Mr. Harrow will continue his successful path as an ongoing contributor to the international electronic music community as an engineer of artistic evolution.