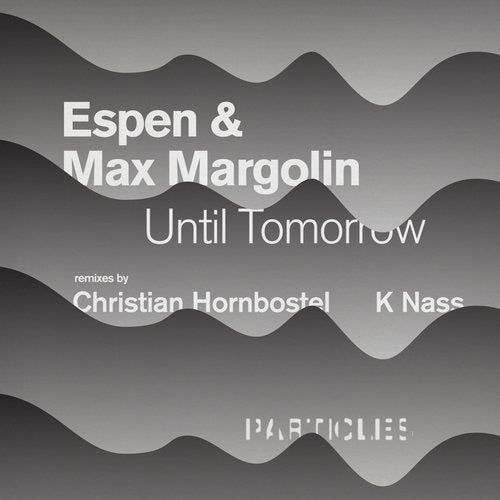 Espen and Max Margolin are no strangers to the world of electronic music. Now joining forces for a debut collaborative release, "Until Tomorrow" finds the duo's original accompanied by remixes from Egypt and Germany.

With over 200 production credits to his name, Espen has consistently hit the heights in a career that spans 15 years. Regularly supported by Armin Van Buuren in his early career, work for Silk Music, Stellar Fountain and Lost Language have seen the Norwegian globally renowned. A pair of remixes saw Espen grace the Particles catalogue in 2016 and 2017 as he now joins forces with Max Margolin. The Israeli artist is no stranger to success with a debut for OLD SQL in 2016 before seeing his work allied to the likes of PHW Elements, Clinique and Electronic Tree. Now working their combined magic, "Until Tomorrow" is a multi-faceted track that combines a heavy beat with expertly sculpted melodic layers and dramatic chord progressions. Building with ease and a sumptuous delayed motif, a grooved bassline and dancefloor prowess underpin while richly textured and ethereal pads pans across the stereo spectrum. With additionally created layers, a pulsating wall of sound hits the listener at the mid-point before rhythm and bass find their mark once again in the post-breakdown throng.

An artist who has found himself at the forefront of dance music for over 20 years and over 2,000 production credits, Christian Hornbostel has carved a sizeable niche for himself with his distinctive production work. Supported by a global DJ elite that includes Pan-Pot, Stacey Pullen and Alan Fitzpatrick, the Germany based artist's work for Kling Klong, Natura Viva and Colore has lit up clubs across the globe. July 2018's "Ampere" EP saw Hornbostel hit Particles with a twin-track EP of Melodic Techno prowess alongside remixes from Huminal and Bonaca, while a reworking of Pysh in September is now joined by a trademark remix. A pounding techno kick and offbeat percussion forms the backbone for a sensitively sculpted remix that flows with myriad melodic lines while intelligent use made of Espen and Margolin's original components to create a sharp and manicured offering. Redolent in Hornbostel's additional production material, an additional riff hints at the themes of "Until Tomorrow" whilst creating a highly original piece.

Renowned for his "deep and melodic progressive house", K Nass has been a regular on a host of blue-chip imprints that include the likes of Balkan Connection, Superordinate Music and Electronic Tree. Hitting Particles in March 2018, the Egyptian's "Praiano" EP showcased a trio of impressive originals alongside remixes from Matias Chilano and Pacco and Rudy B. Now returning, the K Nass remix takes "Until Tomorrow" on a rich progressive house outing that flows immediately with rolling percussion and smooth bass groove. A deep kick and vocal-infused airy pads add impressive texture as they flit across the left-right spectrum in delayed and gated fashion, coming to the fore at the spine-tingling breakdown. Hitting its stride in the second half, a clever combination of Espen and Margolin's original components are combined with K Nass' own production work to create a rich sonic collage full of passion and technique.