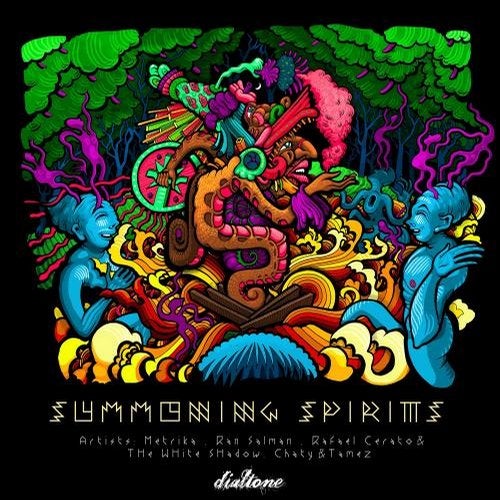 Dialtone Records' maiden vinyl release 'Summoning Spirits' is a bold way to get the club-hungry, weekend masses moving - and may even go as far as getting nods from full-time electronic nerds in the process. Comprising four original tracks from artists releasing on labels such as Diynamic and Crosstown Rebels, I can't help but feel that their first impression in wax, focusing on the more melodic side of deep house and softer techno is a positive sign of things to come from this Mexican-based outfit. The radical cover art work by Canadian artist Jason Botkin presents the EP like an R18 DMT cartoon, a bright yet complex way to present everything that lies within it to the world. All in all, the tracks do not write chapters for the same novel, but in this case it doesn't matter, it's joint by its eclectic moods and melodic structures. This release which will have people asking whose behind it, where they're hanging out this weekend and when they're gonna bring out the next load of YES to our ears. Support: My Favorite Robot, Jay Tripwire, Agents of Time, Betoko, Jonas Saalbach, Sevendoors, Kris Davis, Roland Appel, Just Her, Katrinka, Alex Zed, Mattia Pompeo, HimselfHer, Matt Hardinge, Sam Pauli, Nick Devon, Indie Horizons, Vanilla Ace, Aldrin, Clint Stewart, Kellerkind.