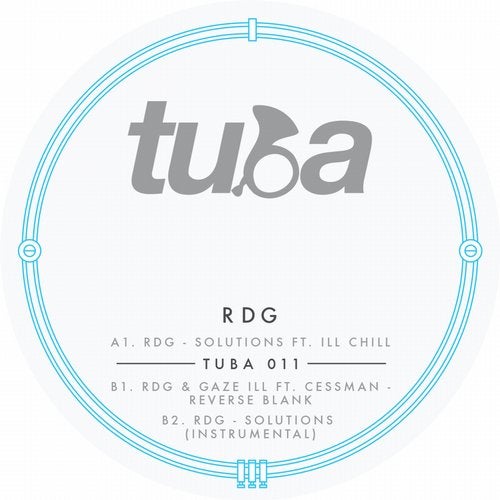 Denmark's RDG follows his 2014 TUBA NYC EP with the 12" single, Solutions. The A-side fuses the deliberate, dramatic, and impressive lyrics from L.A.'s Ill Chill with bone chilling sub bass modulations and huge cavernous beats.The tone gets even darker on the B-side with Reverse Blank, a pulsing, stabby warehouse-shattering dropper. Cold mid frequency stabs masterfully drenched in reverb ring out alongside stacked drum hits. Gaze Ill gets the co-production credit with Cessman jumping on the buttons to finish this one off. Mesmerizing! Born and raised in the cold northern Danish countryside, RDG was introduced to music from an early age through his father, and spent years as a kid collecting samples, playing with musical toys or listening to records.With his relocation to Copenhagen as a teenager, RDG immediately dove into the underground music scene and heavily involved himself in music production, organized underground raves and put on nights at bars and clubs to further promote local producers, MCs and DJs. Fast forward ten years and Ruben now successfully runs two record labels with over 40 releases combined, and has organized events at essentially every night club with a noteworthy soundsystem in Copenhagen, across multiple genres like dubstep, drum 'n' bass, techno, juke, garage, grime and many more. As a producer and DJ he has released and appeared on a handful of vinyl releases, toured North America and Europe, and has had his music featured on major public and pirate radio in the UK, US and Denmark.