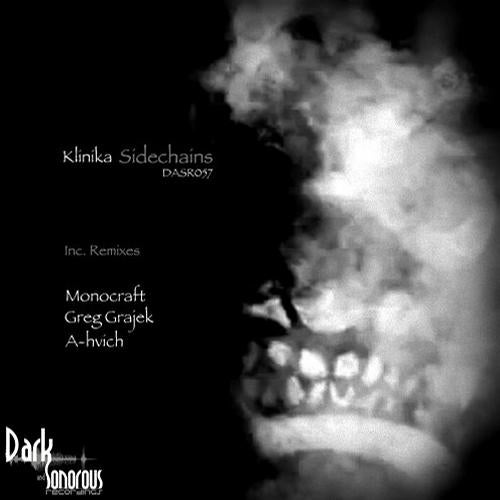 "Sidechains" with amazing remixes by Monocraft, Greg Grajek and A-hvich.Klinika - techno duo from Chernivtsi, Ukraine.The project was created in autumn 2008. Its creators - two associate and friends -Vitaly Mikhailyuk & Vitaliy Lupashko. General views on a electronic music led to the creation of a project and its own style - TECHNO with experimental atmosphere and an emphasis on the dark side music of machines. From the first day they began to work with techno-music which differed from mainstream, that making it possible to get a contingent of fans of non-standard sound. In spite of the fact that fellows came to music each by it by a way, their creation combines ideally, and the unusual has interesting, high-quality new sound. The main advantage of the rapid development of projects in recent years is a creating of their own sound, that is dont left in attention of foreign record companies. It was released 2 albums, many singles and releases more than 10 labels, including: Electrax, Android Muziq, Machine Box, Techhead, Pilbus, Italo Business. Supported by: Dubfire, Sven Wittekind, Dj Hi-Schock, Octave, Logotech, Audio Injection, A-Brothers, Cabarete Groove, John Karagiannis & Paylipservice, Gabeen, Michael Schwarz, Flex, Cortechs, Alessandro Piatto, Dandi & Ugo.Enjoy!