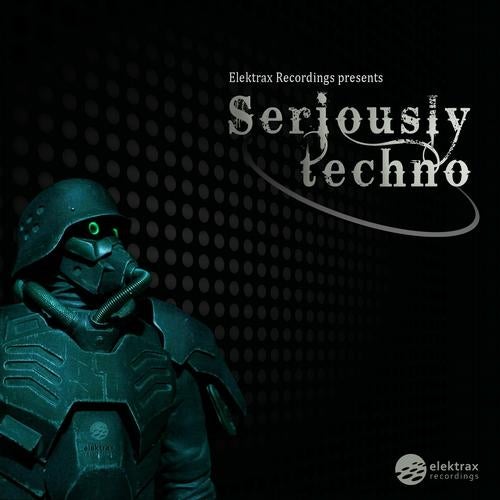 Seriously Techno is just that and more. In a day when genre definitions have grown quite uncertain, this compilation brings together veterans and upcoming artists alike; all with a united purpose. Bring back the true definition of techno. Proper, dark, moving, bass fueled madness. Seriously techno.

The legendary Blunted Boy Wonder, Steve Stoll's "Handiwork" remixed by Sweden's Cari Lekebusch provides some sweet anologue bliss and classic 909 drum programming. This groove is a mover. The 909OHH in particular carries forth as the track progresses with some really sick metallic percussion hits. This is techno!

Dani Dimitri's "From Portugal With Love" is a true definition of a mid night wonder... backing synths speak together amongst a bubbly acid fueled bassline.. plenty of spaced out reverberated interludes nd some really clean and well defined percussion create a nice combination here. The lead hook drops in and the nasty percussion persists. The kick, the hook,the track... simply put.. proper.

DJ Hi-Shock's "Asama Express" takes us on a journey through bass filled mountains and reverberated heavenly bliss. Crafty sound sculpting on Simon's part crafts a variety of lovely sounds emulating those of a passing train. Classic filtered synth stabs progress into a beautiful melody that gives the sense of one actually being on the ride from Nagano to Tokyo. Serious sound quality on this one. The track continue to build up making an occasional stop here and there to pick up the listener and drop him off straight on the dancefloor. Madness!!!!

Zair's "Hardslipper" is one of those cuts that contains one of those dark eerie synth stabs which will most definitely be respobsible for sending shivers down the spine of many a wide eyed bloke at the club. Bass blunted and effect fueled; this track is killer late night material for sure.

Flag 75's "Over Again" brings to the table a cascading wave of bass-full bliss.. the kick and bassline both fit together well... some classic synth stabs carry on as the crisp well programmed percussion (including a sizzling ride, not to be missed) shines through... one sexy beast on a spectrum analyzer let me tell you. killer track for late night dancefloors.

Dave The Drummer is at it again with "Cut And Paste"... This brings me back to raves in New York City back in the nineties.. rolling basslines and pounding kicks assault the listener as varying synth and vox clips take turns speaking out. lovely use of drop out interludes here.Lovely rides and other percussive elements all over the place...killer track giving big respect to the old school while maintaining some serious futuristic production quality.

V1NZ "Turncoat" gives a big thumbs up to those tracks we used to hear at outlaw parties across Brooklyn and Queens in the nineties. Serious warehouse vibe here. dark undertoned synth parts, effects laden patches, and true proper percussion prey upon the dancefloor. Serious techno!

In "Before the Trip" DJ Devious brings out a fine display of his skills in the production arena. Brilliant effect loaded drop outs really aid in moving things along as some serious quality synth stabs and proper perc loops drive things forward. Excellent kick/bassline/reverb combination is present here which hails back to the floor stompers of the nineties. Nice one.

Booming bass, serious synth patches, and initricately crisp portions of percussion, oh my!!! Polygon Prompt's "Loopnumber320" is a masterpiece. Sure to put the crowd in motion.

DJ Warp's "Vogue" incorporates a strange sin wav-esque synth loop along with some bangin drum sequencing to keep those heads bopping. some classic synth parts join the assault as the track explodes into sonic ecstasy.

Bangin. Bangin. Bangin. DJ Hi-Shock's "Melancholia" is simply put, some serious bangin techno. This cut pushes out some serious distorted kick drum action. contains some really nasty dropout edits and a dark quality that one could only worship. Bangin.

"Sorted" by Roman Zawodny brings the sound of a posse of drium machines ,marching hard down the boulevard. Detroit-esque melodic synth stabs bring the yin to the yang here. Nice piece of techno "El Clasique" on this composition.

Chicago Native Wyndell Long's "Clever" drops a classic 909 kick filled with oomph amongst some brilliant hi hat patterns. Real analog sounds on the percz here. The intricately simple melodic undertones pull everything together and form quite the lovely piece of techno here.

Michael Wenz "Expiration" is really a bangin cut. the bass and kick alone are enough to knock redbulls and water bottles off of tables all over the club.. some sick acidic 303 parts join hands with some really hot percussive elements tweaking out in ear raping bliss. one sick tune for sure guaranteed to rock the night!

Final track is a "Hydraulix 13.8" remix by Jeff Amadeus & Dave The Drummer. This piece is 100%% fresh and guaranteed bangin', this is proper, hard-edged and irresistible. This is...Seriously Techno.