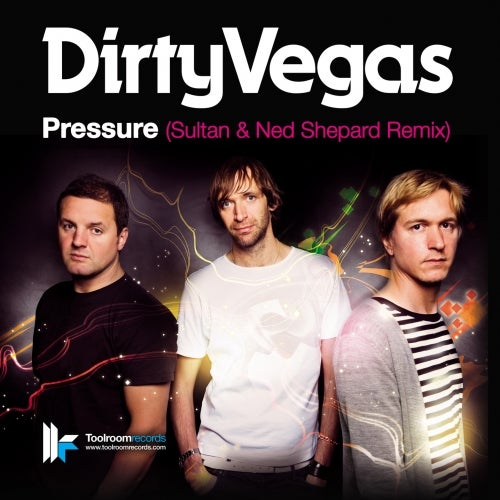 You'd have to have been hiding under a rock for the past five years to be unfamiliar with the name DIRTY VEGAS. Bursting onto the dance scene in 2002 with their self-titled debut album, the UK-based trio have sold close to a million records worldwide, toured the globe with artists including Moby and Groove Armada, and even won a Grammy for their major dance/pop crossover sensation 'Days Go By'! Now after a 4-year hiatus, Ben Harris, Paul Harris (no relation) and Steve Smith return with their comeback single "Pressure". "Pressure" is a seriously heavy hitter that has whipped tastemaker Pete Tong into a frenzy, gaining repeated plays on Radio 1's Essential Selection, and becoming the certified smash hit of this year's prestigious Amsterdam Dance Event. The track has been remixed by Montreal's eminent DJ Sultan and his production partner Ned Shepard, who are themselves responsible for setting Beatport's Top 10 Chart on fire recently with 3 consecutive tracks. It's safe to say that with this pedigree, "Pressure" couldn't fail to be an electrifying release! The track itself is an intense, emotive, truly distinctive club bomb that has a total hold over every dancefloor from the first moment to the last. Layers of swift rolling beats cocoon Steve Smith's enigmatic vocal, building and flexing steadily and leaving you in no doubt that an amazing ride into sound is beginning… Teasing the dancefloor by weaving parts of the vox in and out, four minutes in the track simply explodes with the full strength of that desperate, heartfelt vocal pouring forth over the perfect synths. Extraordinarily compelling, "Pressure" carries you along on waves of glorious sound and lodges itself in your head like no other track; a magical slice of clubbing gold that's destined to become a genuine classic. The definitive track of winter 2008, "Pressure" shows that Dirty Vegas are back - brighter and more brilliant than ever before. Don't miss this release!!!