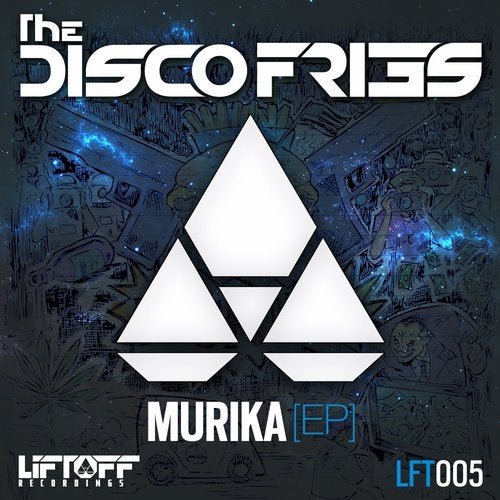 The Disco Fries kickoff 2014 with a genre-bending EP. "Murika" manages to span
several different styles with progressive, hardstyle builds and some vicious
electro drops. A version of "Murika" was offered as a giveaway back in early
2013 but has been re-swizzled into a 3 track EP. The release includes a remixed version of the single by Tommie Sunshine & Live City, as well as a new track titled "Crank This" alongside fellow Liftoff Recordings artist, Aylen.

With a modulated vocoded synth and nasty bassline, the lead single makes enough clever use of almost every type of genre in the game to become an
early 2014 anthem. Frequent collaborator Tommie Sunshine (one half of Fries &
Shine) and Liftoff artists Live City come together to provide a pulsating,
electro barn-stormer taking "Murika" in a different direction whilst never
losing the core sound that makes it so addictive.

On the b-side, the Disco Fries team up with Aylen to produce "Crank This," a multifaceted, electro-stomping original with a growling bass line and trap breakdown. The track contains a funky maze of bouncy percussion, sirens and vocal samples that
build into a menacing, bone-shaking drop. The hype that this track delivers is something that it is abundantly clear the Disco Fries and Aylen have no shortage of.

The Murika EP is inspired by every melodic, groove, and musical element that is
motivating our live sets right now. - The Disco Fries