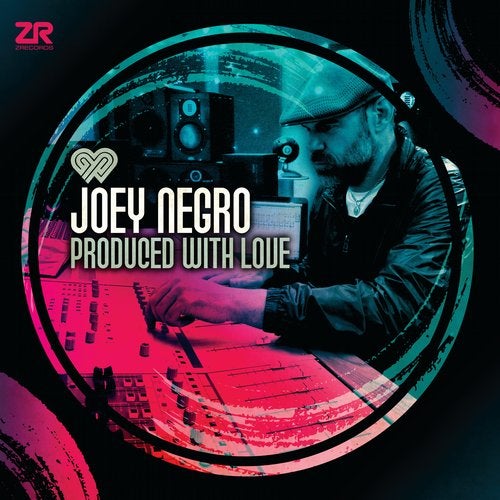 Produced With Love is the extraordinary new album from UK legend Joey Negro: a buoyant, life-affirming, disco-inspired album that offers welcome relief from the grey-faced march of modern club music. I was 13 when I first heard Boogie Nights by Heatwave on a childrens TV show called Multicoloured SwapShop and it started a love affair with disco music that has lasted all my life. Theres so much to love in disco. 40 years later I still hear plenty of sample tracks based around disco records but what I dont come across much of is actual original new material made to the disco blueprint. - Joey Negro Its hard to find enough superlatives to describe just how influential and prolific Dave Lee, aka Joey Negro, has been over the last three decades. One of musics major proponents of soulful, disco-tinged, vocal records and without question instrumental is its development and popularisation, no-one treats a loop, groove or hook with as much care and attention as Joey Negro. Whether you realise it or not, Joey Negro productions have more than likely been soundtracking your life. Throughout the 90s and 00s right up until today, he has produced an astonishing number of records and remixes under various names and for some of the worlds biggest and greatest artists. Grace Jones, Diana Ross, Deep Dish, Lionel Richie, Mariah Carey, Tears For Fears, Ultra Nate, Masters At Work, Roy Ayers, Blaze, Roger Sanchez: across both underground and pop music, the list goes on, contributing to one of the most impressive discographies in music, irrespective of genre. Throughout his career, disco has been a key ingredient of the Joey Negro sound, and alongside the likes of Nile Rodgers, Daft Punk, Jamiroquai and Dimitri From Paris, hes one of the few artists to have been keeping the disco fire burning. Produced With Love is only the second ever Joey Negro album to be released, and the first for more than 20 years. And as the electronic music scene threatens to be overrun with faceless, bland and forgettable productions, Produced With Love proves that dance music with character still exists. And rather than rely on sampling older records, the overwhelming majority of music is newly recorded: a real rarity when it comes to modern disco and indicative of the level of detail involved in the project. During his career, Joey Negro has helmed a staggering number of acclaimed compilations and remix albums, including Defecteds In The House and House Masters series, Remixed With Love, Disco Not Disco and Kings of House: a haul not very few producers can lay claim to. Most recently, last years Electro compilation was incredibly well-received, while Remixed With Love 2 which included exclusive reworks of Robert Palmer, Grace Jones and Christopher Cross all from the original master tapes proved that JNs powers were as sharp as ever, with the collection going on to be Traxsources best-selling of 2016, reaching top 30 on iTunes album chart, and also being named DJ Mags compilation of the year. And so, back to the small matter of Produced With Love. Album opener Prove That Youre Feeling Me feat. Diane Charlemagne is without question one of the catchiest and most urgent disco records produced in the last decade. Evoking the great Nile Rogers and Chic at their funkiest, it trips along on an exquisite bassline with orchestral strings and Charlemagnes vocal lending the record a truly timeless quality. Unfortunately between starting and finishing the project the supremely talented Diane Charlemagne, the singer/songwriter who I co-wrote many songs with over last 10 years very sadly passed away. We had a great working relationship, which was both fun and honest. Most of my final collaborations with Diane, Overnight Sensation, Prove That You're Feeling Me and the partly re-written remake of Must Be The Music are on this album. - Joey Negro R&B and house music mainstay Linda Clifford narrates on Wont Let Go, a deep house cut that celebrates musical escapism, whilst Its More Fun To Compute an unlikely cover is a fully orchestrated disco rework of Dusseldorfs finest. Further highlights include a completely remade Must Be The Music (one of Joey Negros best-known records), which is utterly transformed from its previous incarnation, whilst things get both dubby and jazzy on the Arthur Russell-evoking Distorting Space Time.