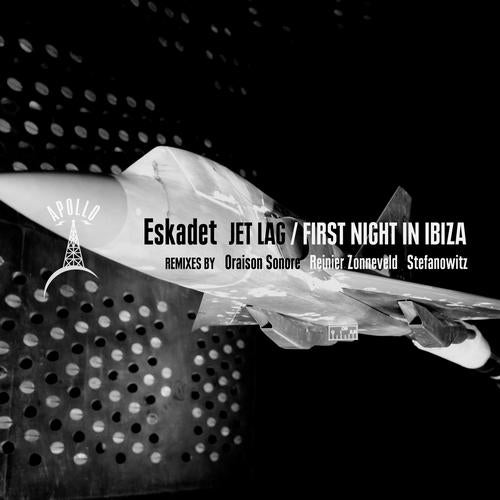 Under his Eskadet moniker, Stephane Klepper has been responsible for some 150 track credits gracing the likes of Silk Sofa, Etoka and Hashi Music. Furthermore, work for Apollo saw Eskadet's "Jet Lag" and "First Night In Ibiza" form an integral part of the Summer 2012 "Skylab" compilation. The shimmering, summery vibes and guitar riffs of "First Night In Ibiza" characterised a sound encapsulated by the 'party' island capital of Europe, while the warm deep house vibe of "Jet Lag" brought a bass line melody and rhythmic arpeggios that were worthy of any modern progressive offering. Now, as we begin 2013, Apollo is proud to release both tracks as in their own right with three remixes from Europe's finest.

Support from the likes of Richie Hawtin, Dubfire and Pig and Dan illustrates that Holland's Renier Zonneveld is a producer at the height of his game. With a sound focused on techno "with a somewhat minimalist approach", originality is a key ingredient in Reiner's work. Exploring "innovative sound textures and rhythms" is also fundamental to Reinier's musical motive and nowhere is this better articulated in his rework of Eskadet's "First Night in Ibiza". A deep bass line carries the track dynamically and rhythmically forward while textured effects and gated stabs are juxtaposed against a free-flowing brass phrase resulting in a special track.

Hosting impressive deep house names such as Terry Lee Brown Jr and Addex on his label roster, Greek "Lovezone" label owner, Christoph Kardek has also been responsible for a number of releases in his own right for Etoka and Atal. His work for Apollo has also borne fruit in the shape of his "Gratitude feat, Christoph Kardek" EP in June 2011 with remixes from Apollo regulars, Addex, Evren Ulusoy and Big Al. Remixing "First Night in Ibiza" under his Oraison Sonore production guise, Christoph has produced a laid-back, deep house gem full of blissful pads, ambient birdsong, and reverb-drenched organic brass sounds, interspersed with swung percussive hi-hats and a pulsing rhythmic component. Myriad layers make this a joyous listening experience

Approaching 200 Beatport track credits, Stephen J. Kroos has seen his music played by the finest DJs and signed to largest modern labels. Under the name Stefanowitz, the prolific Dutchman has derived further success using his deep house and techno alias, with his work featuring on Eelke Kleijn's, Outside The Box and a plethora of tracks signed to the Amsterdam based Strom Recordings, including a full-length album entitled, "Zeitgeist". Turning his considerable portfolio of skills to Eskadet's "Jet Lag", Stefanowitz had produced a techno-fuelled rhythmic gem of a track, full of drive, energy and vibrancy that build to an epic zenith before a drop to keep dance-floors at full capacity.

Three refined remixes from Renier Zonneveld, Oraison Sonore and Stefanowitz ensure that "Jet Lag" is the last thing on the mind on Eskadet's "First Night In Ibiza".