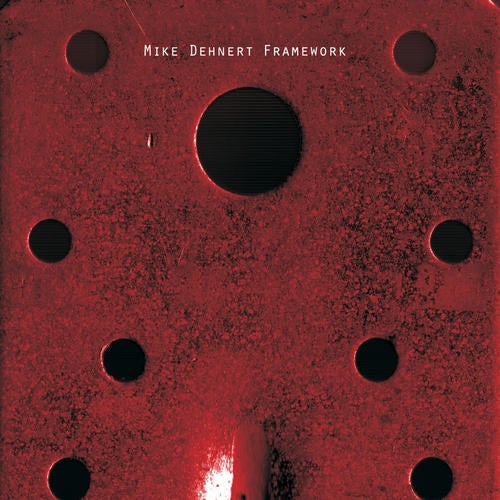 New school techno producer, DJ and live performer Mike Dehnert releases his first album proper on Delsin Records. In just three years, 30 year old Berlin born, bred and based artist Dehnert has gone from unknown talent to underground hero with (as revered record store Hardwax calls it) his very own 'raw techno' sound making waves with his own constantly excellent Fachwerk label, as well as the odd outing on hallowed imprints like Dutch outlet Clone Basement Series, as well as dub techno stable Echochord Colour, super reticent outlet MD2 and now Delsin, where he finds himself at home amongst the future music of talented cohorts Delta Funktionen, Redshape, A Made Up Sound and more. Framework - as you'd expect of a man who performs genuinely live for hours, often only ever calling on his own tweaked, edited and skewed productions - is an uncompromising album made up of pure techno tracks of the sort you'd expect to hear on the dancefloors of places like Berghain or Tresor. They go from pulsing and classic sounding to skipping and glitchy, through greyed-out and sandy via swinging and syncopated but always with a sense of restraint and control whether they are abstract, apocalyptic, atmospheric or whatever else. Drawing from a dusty, dirty toolbox of sounds, the echo-y, cavernous chambers and dusky warehouse aesthetics of Dehnert's moody music betrays the purity and simplicity of his arrangements. Although his records are undeniably functional, at the same time, they are neither nondescript nor forgettable: somehow, through masterful sound designs and an accomplished knack for blending real tension and atmosphere with his obvious Basic Channel and Berghain influences, Mike Dehnert manages to lock you into whatever mood takes his fancy with apparent ease. Make no bones about it (he doesn 't) Framework is an album of tracks. Each one is made with various dancefloors in mind, and each is informed by the hundreds of hours Dehnert has spent working away in such places. The results are to-the-point without being unsubtle, each track has a job to do and does so efficiently; nothing is surplus to requirements and nothing is lacking. Whilst outlining a Framework for his many live sets to come, this debut album also makes for engaging listening and confirms Mike Dehnert to be one of contemporary techno's most exciting current incumbents.