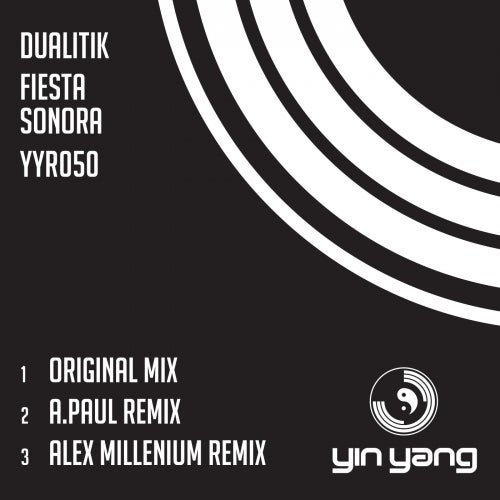 Dualitik are no newcomers to the scene. They have been pushing forward the sound of techno for a number of years and have since grown massively and got a great reputation as being fantastic producers and DJ's. As well as now being on Yin Yang, they have also featured on labels such as 1605, Italo Business, Sabotage, Renesanz, IAMT, Binary404 plus much more. They have had previous DJ support from Umek, Carl Cox, Dubfire, Richie Hawtin, Mark Knight, Cristian Varela, Beltek, Alex Di Stefano, Pedro Delgardo, Paco Osuna, Christian Cambas, Angy Kore, Phunk Investigation, Joey Beltram, Spektre, Misstress Barbara, Markus Schulz, Tom Hades, Paul Van Dyk ....and many more. This is Dualitik's debut on Yin Yang and the track is called Fiesta Sonora. It's a great funky number that slips into all the genres of techno with ease. It's programming and mixdown is absolutely genius. 'Fiesta Sonora' features remixes by Portugal's Super Mr. nice guy 'A.Paul'. He takes the funky original and gives it his trademark dub sound and takes the track into much deeper realms. A fantasic remix. The next remix is by another debut artist to Yin Yang. Alex MilLennium. This guy is another big up and coming techno artist. Here he delivers the goods with a solid driving nu style techno mix that will for sure have the crowd begging [for much more]. Watch out for more releases and mixes from this guy on Yin Yang in 2014. Part two will feature remixes by RioTGeaR, Steen and mr Stanny Franssen.