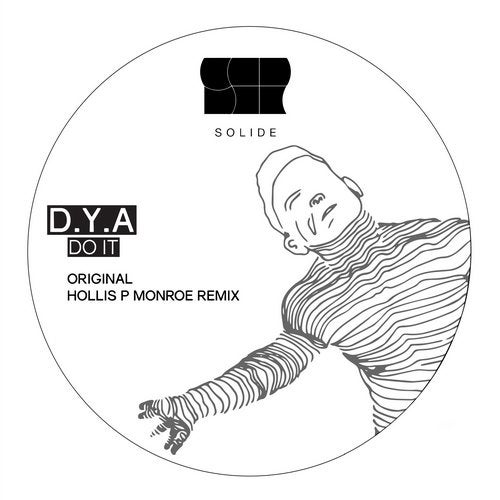 D.Y.A - Do It including Hollis P Monroe Remix All good things come in threes, so as the new Solide Edition (SL003) entitled Do It by D.Y.A Last time you heard from us, each crew member produced a tune which was part of a new concept to maintain the output of the label in between the main releases via digital platforms. Anyhow, this time we're not only happy to come back to our spotlight series but also pleased to close the first circle of releases with this very special EP. On one hand it is special cause D.Y.A's debut release in 2013 also featured Maximilian Bischofberger on the vocals (lead singer of the band Brothers of Santa Claus) on the other hand Montreal based house veteran Hollis P Monroe, currently taking up residence in Berlin, contributed a remix! In case you're not familiar with Hollis check out his smash hit Im Lonely already released in 1997, which is considered to be a Panorama Bar Classic...enough said. A1 The original starts with a rough percussive beat accompanied by far left - right panned synth & live guitar patterns. Atmospheric chords, combined with chopped samples of the vocal fade in and lead to a first small drop, which is followed by the introduction of the bassline. D.Y.A managed to create a hybrid hypnotic sound by layering the bassline pattern with a moog synth, which stands out as the lead sound of the tune. The lyrics basically describe a test of courage within a group of people, in a certain uncomfortable environment, where the protagonist has to decide wether its worth it to take the risk of doing this special test or not: I would do it B1 Whoever tends to digg deeper vibes should have a listen to this remix. Hollis came up with a much more straight ahead groove and accomplished his approach with deep bass & synth lines, only using the vocal and various percussion samples from the original. The tune tends to have an even greater hypnotic character than the original, but in a much more relaxed and mellow fashion. Beautifully chosen chords on top of dynamically working synths, sometimes resolving in suitable drops, define the character of this great remix.