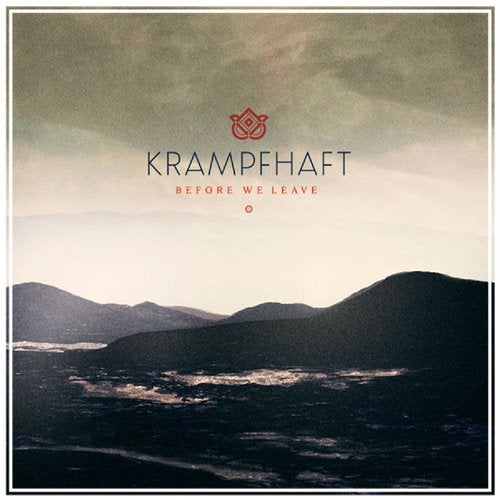 In the space of three years, Dutch producer Krampfhaft has established himself as one to watch with a small string of functional yet emotive dancefloor releases that have garnered support and acclaim from a broad range of contemporaries including The Gaslamp Killer, Om Unit, DJ Shadow and Kutmah. He returns to the Rwina label with Before We Leave, his debut album and most complete statement to date. ! Once more pulling from the twin roots of electronic/dance music and sound design that have defined his work to date, Krampfhaft sidesteps genre specific formulas on Before We Leave and instead rides a fine line between dancefloor and headspace. There are hard hitting moments and ecstatic peaks, but these are carefully balanced with more introspective, melodic reflections designed to give the listener an experience that isn't limited to the club. Before We Leave is just as driven by atmospheres and imagined sonic places as it is by the desire to make people dance. ! This juxtaposition of the dancefloor and headspace is reflected in the album's tracklist and how the 16 tracks flow across its length. 'Superfluid' offers the first upbeat moment, solid drums against grinding synth melodies, but the accumulated energy of the track is instantly pulled back by 'Frostbite' as Krampfhaft plays with imperfections and bright, distant melodies to paint a sonic picture of slow deterioration across a sparse rhythm. The imperfections and noise found lodged throughout the album bring to mind a digital rot, as if the music was slowly unravelling in the hard drive of its maker. Tracks like 'Dormant Code', 'Before We Leave', 'Mostly Empty Space', 'Unfold' and 'Immensely Small' all sidestep any obvious genres, instead scraping away at imposed stylistic boundaries by subverting populist tropes and challenging the listener to embrace them for what they are. ! As a contrast to the album's more reflective moments there are rays of hope, such as 'Veluwe' and 'Extrasolar' with its low-slung drum pattern, uplifting melodies and manipulated sounds that evoke seagulls over washing waves. And there are also moments of darker contemplation, like 'Clip Point' where the all-encompassing weight of the bass drums is cut by a lead melody that buries itself in your subconscious. Aside from 'Superfluid', the energy of the dance floor is celebrated on 'Spinner' and 'Toekan', two tracks with clear intent that still manage to reference the album's underlying idea of rot and distance from any established genre or scene. ! There's a real magic to pulling off an album of dance/electronic music that isn't obsessed with the dance floor or instantly recognisable tropes, and this is precisely what Krampfhaft achieves with Before We Leave. Keen to not find himself trapped in the corner of a specific sound, he instead opts to paint a broad picture that treats the listener as more than just a body in the dance. At times hopeful and introspective and at other times dark and obsessive, Before We Leave is the sound of a producer in full control.