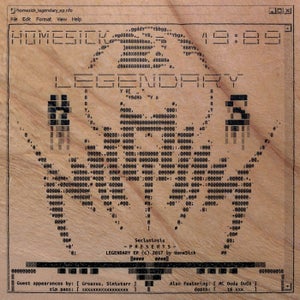 Starting off '17 with a bang, Seclusiasis presents the Legendary EP from HomeSick! Here we have 5 tracks of genre bending, club minded madness! Taking nods from footwork, grime, jungle and more styles - HomeSick has an inventive sound that brings a fun and bouncy vibe while utilizing thoughtful and edgy sound design and overall dopeness. Calgary's HomeSick has carved out a lane for himself in the world of high-BPM club music -- not just by running the Footwork Jungle online community and the Percolate party series, but also through his own, often times amorphous productions and world-class DJ sets. He was selected to be a participant at the 2015 Red Bull Music Academy hosted in Paris, where he was mentored by some of the world's most prestigious artists and producers. Listed by Vice's THUMP as one of the "10 Canadian Electronic Artists to watch in 2016", his performances in Spain, France, UK and Germany solidify his status as Western Canada's bass music ambassador. Starkey & Dev79's Seclusiasis label has been presenting a unique view of bleeding edge urban electronic sounds for years. Among the acclaimed artists they've released are Kastle, ill-esha, Distal, BD1982, Aquadrop, DNAEBEATS, DJ Pound, and the acclaimed Street Bass series.