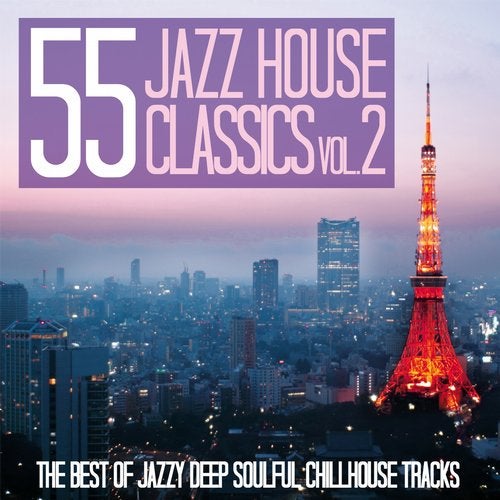 The collection of songs selected in this support is the path that Irma Records has made in recent years in the Jazz House music genre. We arrived after a careful selection, at volume two.
We have assembled 55 of the best songs always following with interest and success this musical trail that has brought to light talents like the Jestofunk, historical group of the label, but also new artists who, along the way, have become part of this great family and have contributed to this research work.

Jestofunk:
The Jestofunk project was born in 1990 from the meeting between three Italian DJs:
Claudio Moz-Art Rispoli, Francesco Farias and Blade (Alessandro Staderini).
Claudio Moz-Art Rispoli, recognized by all as the most important DJ in the history of dancefloor in Italy and initiator of Afro style in the 70s, now re-discovered and internationally recognized, began his record production in the 80s and produces some of Irma Records' first singles between 88 and 89 including Soft House Company and Double Dee 'Found Love'.
In 1990 he met Francesco Farias and Blade, in those days young DJs emerging from Cervia (Ravenna) and Florence respectively, deciding to produce their first single 'I'm Gonna Love You'. In his studio near Ravenna, therefore, the song was born which at its release in the winter of 1990/91 created a real 'case' in the international dancefloor scene.
The song becomes a hit by clubs all over the world and is followed by a year after the equally dazzling 'Say It Again'. With this piece the 'jestofunk sound' is definitely consolidated, characterized by acidfunk sounds fused with the strong rhythm of the house. The three producers then decide to prepare their first album and consequently their third single. For the occasion, they began their collaboration with CeCe Rogers, American-American singer considered one of the fundamental names of the birth of House music.
The single with the title 'Can We Live' immediately becomes the group's best seller and draws the release of the first album 'Love In A Black Dimension' in the spring of 1994.
The group's live activity begins at that time. Live the three DJs to faithfully reconstruct their particular sound, they are surrounded by 7 musicians and in addition to CeCe Rogers. Started a world tour launched by the concert at the Midem in Cannes in 1995 and touched Germany, Austria, Switzerland, France, England and Australia with great success everywhere.
The album Universal Mother comes out in 1998 preceded by the single Special Love sung by Jocelyn Brown. The original soul song is remixed by Steve Silk Hurley, Joey Negro, Jazz'n'groove and becomes a dancefloor hit immediately. Followed by the single Happy, sung by CeCe Rogers, with the remix of Bob Sinclar. In the album, in addition to CeCe's voice, among the guests we find: Freddy McGregor, Fred Wesley and Gabriele Comelio.
In 2002 they finished the work of their third studio album 'Seventy Miles From Philadelphia' released for summer 2003.
In the summer of 2018, the group meets for a successful European tour.

LTJ X perience
Luca LTJ Trevisi (LTJ X-perience) was trained as a producer DJ at the end of the 80s. First of all at the Kinki Club in Bologna and then at the Cap Creus in Imola, he is one of the first Italian DJs to program house music and above all to re-propose those particular tracks of the 70's of black music, jazz and latinbossa that then gave way to the genre Acid Jazz and Rare Grooves.
From the second half of the 90s began his work as producer of acid jazz groups, among which the most important is that of Bossa Nostra. The first album of the group, where he participates as a special guest Vicki Anderson (one of the historic singers of James Brown) is considered by many to be one of the most important European acid jazz albums. Over the years his activity as a DJ is joined to that of collector and dealer of rare records that leads him to get in touch with the DJs around the world and to discover forgotten pearls of music of the past years.
In those years he began his activity as an international dj who saw him playing at the Blue Note, at the Jazz Cafe in London, at the Giant Steps in New York and at the Jazz Festival in Montreaux.
In 1999 he released his first solo album in the name of LTJ X-Perience, which relies on the collaboration of the artist and producer Ohm Guru and sees among the vocal guests the presence of Taka Boom and Jackson Sloan.
After making countless productions for Irma Records, including the second album "When The Rain Begin To Falls" (which includes the participation of the historic Hispanic singer Joe Bataan), LTJ is dedicated almost exclusively to re-editing and recreating passages from the past , with additions of sounds and rhythms in post production for labels like SUPER VALUE, SMALL WORLD DISCO, thus increasing the productions of this new musical genre that currently defines Nu-Disco, also collaborating with international labels such as Far Out Recordings, Sleazy Beats, Future Classics, EAR, Music For Dreams, Apersonal Music.

The Soul Trend Orchestra and Papik

Papik is the project of Nerio Poggi, musician, author, producer and arranger who has made himself known in the Nu-Jazz / Jazz Lounge scene in recent years. He has dozens of albums with the label Irma records, his collaboration with various artists, including Mario Biondi, Neja, Ely Bruna, Fred Buccini and many others, have led him to become one of the most famous musicians and producers in Italy. He was also the author and producer of the soundtrack of the latest film "Arsenio Lupin" in 2016. The "Soultrend Orchestra" project originates from the producer, author and arranger Nerio "Papik" Poggi and the producer and composer Luigi Di Paola with whom Papik has been collaborating for over twenty years. In the selection we chose a remix of Riky Birichino, well-known DJ of the Tuscan coast, he has many international remixes.

Jazz 2 More
Gianni & Enzo Lo Greco (also known as: The Greek Bros, Soulstance, Quintetto Lo Greco, Jazz 2 More) are one of the hottest and most intimate sections of the Italian and international music scene.
The two brothers have built a solid reputation thanks to discs that are always highly appreciated by both specialized critics and fans and musicians of all kinds. Characteristic of the team is the great ability to involve the public in their improvisation textures. They collaborated with Chet Baker, Brian Auger, Ray Charles, Stevie Wonder, Elton John, Jobim, Lalo Schifrin, Dee Dee Bridgewater, Nicola Conte, Rosalia De Souza, Gerardo Frisina and many other internationally renowned artists. Their production is also very well known, among them "The Is What You Are" is the famous song played by Mario Biondi, a hit known throughout Europe.

Don Carlos
Don Carlos (Carlo Troja registry office) in the 90s became one of the cult producers of international DJs.
His song Alone released in 1991 for Irma Records was and still is one of the classics of the house.
It was played by all the major American and English DJs.
At the time it did not sell very much, 15 / 20,000 copies more or less, but over the years the myth of this song has grown thanks to subsequent productions such as the second single / Ep Mediterraneo from which then was inspired by his first album in CD printed in the USA with the same title that included the two singles.
A year ago, after great requests, we decided to give the license for the reprint of the single Alone and today we have exceeded 2500 copies of the mix version.
They have followed several other singles, another album always printed in USA entitled Aqua, which was made a triple vinyl that today is one of the rarities most requested by the artist. In Italy we released in 2002 his third album entitled The Music In My Mind where Michelle Weeks, Taka Boom and Kevin Bryant were present as vocal guests. In 2009 a collection of the first two albums released in the USA (unavailable) from the Mediterranean title and in 2010 his fourth album entitled The Cool Deep that soon, by popular demand, will be printed on vinyl for the first time. Also active as a remixer for Italian international labels, among his most important works I remember you the remix of Byron Stingily of the song You Make Me Feel of which he made a worldwide hit. As a producer he also used other pseudonyms like Montego Bay, Aquanuts, Underground and Love 2 Love Orchestra. He has played and played in several countries, London, New York, Miami and several festivals, and will soon be performing at the Stickermule Festival in an evening with Apparat, Derrick May, DJ Koze, Lil 'Louis, Young Marco and Ellen Allien.

Black Mighty Wax
Cesare Cera AKA BLACK MIGHTY WAX, starts working in the music circuit in the late 70's, playing as drummer and percussionist with various groups of the Italian funk-jazz scene. During the 80's he works as radio dj broadening his music knowledge and becoming more and more passionate of 70's funk-soul, jazz and disco spinning these sounds several nights in various clubs. In the early 90's with the explosion of house music Cesare Cera finds inspiration to start his first productions teaming up with Soundhands & Elise naming the group BE NOIR. With "Give me your love" released in 1991, Be Noir received very good response from dj's in the US, UK or Japan doing well also in specialist charts worldwide. >From those days, he started to spin music in various clubs around the world falling in love with house music. Co-founder of the Irma Records during those days, working for the label like Int'l Label Manager and producer. He's the mind behind several compilation series like Acid Jazz and Soul Classics, Jazz House Independents, Sister Bossa or Chill Out Cafe.

Riviera Traxx
Riccardo Montanari, aka Ricky, founder of Riviera Traxx, together with Davide Ruberto, Enrico Serotti, Flavio Vecchi, Kid Batchelor, Marco Bertoni, Patrick Duvoisin, has long been one of the most acclaimed DJs of the Belpaese and is a name now recognized in the environments of house music from all over the world. Born in Rimini, he became passionate about the music world in the late '70s, when the profession of DJ was not yet widespread and defined as today - at least in Italy - and the equipment and techniques of mixing were " use "only a few enthusiasts, Montanari was, one of those who seriously contributed to introduce that" species "of musical creatives.