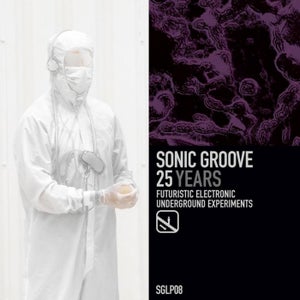 In 1990, Frankie Bones opened Groove Records, a techno outpost deep in Brooklyn. Adam X soon became a co-owner and by 1995 the shop was relocated to Manhattan, with Heather Heart rounding out the trio. The new shop was called Sonic Groove and it quickly became ground zero for techno in New York City. There was nothing like it in the area at the time or, arguably, anywhere in America.

Sonic Groove was 110%% dedicated to techno, a genre that was just past its infancy and exploding worldwide. A community emerged around the shop and thus the label was spawned.

Adam X had an agenda from the very beginning as label curator (and eventually sole owner): to release some of the most forward thinking underground techno music around. Realizing that goal was no easy feat, considering the volume of records being released at the time in a fast-paced and growing scene.

Fast-forward 25 years. Adam X and Sonic Groove are still at the forefront of modern underground techno, sticking to the same ethos and pushing the envelope further into the future. The faces and sounds may have changed, but the label has kept true to the vision. In an era now dominated by image, style, and trivial content, Sonic Groove continues its mission of putting the music first and foremost.

Now in celebration of 25 years, Sonic Groove releases a muscular 12 song compilation of previously unreleased music comprised from the label's current artist roster. A testament to techno's ever evolving sound and serves as a modern document showcasing the path Sonic Groove has taken and where it has led to, proving that as time passes, there is still room for creativity and innovation in the genre as demonstrated throughout these 12 tracks.