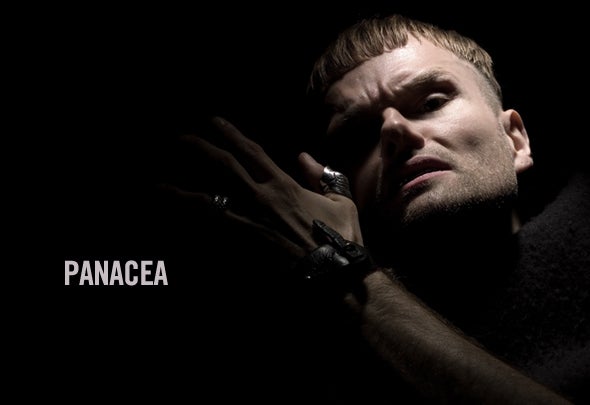 Mathis Mootz, the teutonic mastermind and producer behind The Panacea from Wuerzburg, Germany, has developed and perfected his sinister drum & Bass mashup style over the years. The Panacea is digital Napalm Death, he samples and throws together elements of hardcore techno, drum'n'bass, jungle and industrial creating a truly powerful, explosive sound. As one of the dominant faces of the iconic german record label Position Chrome he has released 25 ep's and 5 albums since 1996. His debut 'Low Profile Darkness' was one of his most influential works to date and a huge success with over 12.000 copies sold. It received diverse support from a variety of genre's such as metal, industrial, goth and punk. it was truly ground zero, a monolith for heavy music to come. Others followed like the techno & hardcore influenced 'Twisted Designz','Phoenix Metabolism' with it's hip hop & booty-bass roots, the enormous 'German Engineering' & 'Underground Superstardom', as well as the experimental & noisy 'Architettura'. His experimental, electro, and neo-industrial beats were produced under the aliases of Squaremeter, Disorder, Warfare, Kate Mosh, Bad Street Boy, Radar, Rich Kid and Warfare. These productions were released on labels like Mille Plateaux, Ant-Zen, Hands Productions, Caipirinha, Ambush, Ad Noiseam, Kniteforce, Intransigent, Outbreak, Offkey and Freak Recordings. With the much anticipated 6th full length album on the way, he continues to bring his otherworldy dimensions while on a busy tour schedule. It is evident that The Panacea has found a musical language that transcends trends and genres.