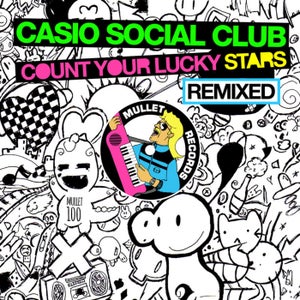 Indeed, the mighty 'Mullet Records' is now 100 releases strong and we decided to go all the way back to our first ever release 'Casio Social Club - Count Your Lucky Stars' and have it remixed by some of our fave Mullet artists. First-up is a never released extended version of the original, that we've called the '2015 Extended Mix', so dj's can now spin this in their sets with ease, and help shed an extra florescent Disco light on the original 2008 groove... niiiice! :) Next-up, and the first of the four remixes, is the 'Joeblack 'Boogie' Remix', which by all accounts is something very special, as Mr Black adds his ever-reliable trademark vocal touches and super smooth synth playing, as the Brazilian Boogie boy-wonder takes the track to a whole new level. Second inline, is a remix by another hero of ours - Tad Wily! It's been a while since Mr Wily has appeared on Mullet Records, and we were over-the-moon when he agreed to remix this track, as we knew his quirky New Wave funky style would work wonders... and it does, as he takes you on a reverb master class of knob twiddling love. Next-up, are our Swiss Brothers - 'Dragon Suplex'! Now to be honest, over the past few years we've tried not to get too caught-up in the whole trendy 'Deep House' scene, but sometimes you simply have to acknowledge a great producer when you hear one, and 'Dragon Suplex' are exactly that, as they guarantee to bring the fattest grooves to the party. This one absolutely slams. Lastly, and by no means the least, we have a remix that actually made it onto the original 2008 release, and that we simply had to include in this package, as it's been a true "anthem" for us and also played in many-a 'Casio Social Club' dj set. Yes, we're talking about the insanely talented 'Matthew Williams' aka 'the Diogenes Club', and whom we sometimes struggle to find the words to truly express how talented this lovely man is... but in true tDC style, we're not going to bang on about the music and simply let this incredible remix do the talking for itself. Well, all that's left to say is that we sincerely hope that you enjoy our 100th release, and we would also like to personally thank each and every one of you that take the time to legitimately buy and support our releases, as it's the kind music buying public that's helped keep this whole thing going these past seven years... "THANK YOU”!