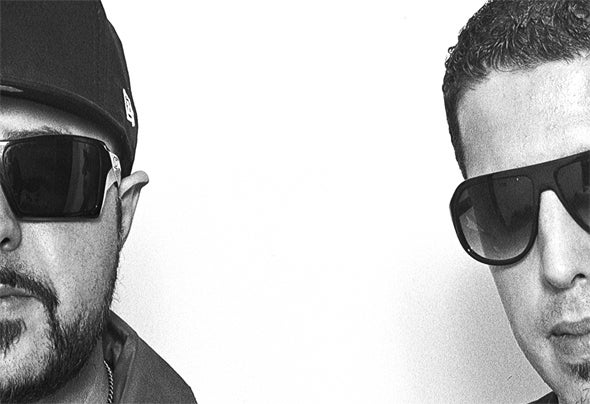 As two wise Chemically enhanced men once said, 'The brothers gonna work it out' and it's an adage the Smokingroove brothers have taken to heart as they've become one of the most in-demand production and DJ duos around. Production-wise, they specialise in deep, Chicago- flavoured jacking' house, the sort that's seen them sign records to Roger Sanchez's Stealth Records and their own Illuminati Recordings imprint, the sort that has got them charted by every jackin' DJ worth his salt (and tequila), the sort of infectious, funk-laden, booty bouncing music that you just have to get down to. And when they're not busy crafting big-bottomed bass beauties, the brothers are busy working on their numerous Podcasts (all available through Apple's iTunes), keeping the underground house scene very much alive and kicking. They've hosted radio shows for over 10 years, featuring a diverse range of guests ranging from The Stereo MCs, Armand Van Helden, Roger Sanchez, Basement Jaxx, Derrick Carter, Mark Farina, Erick Morillo to DJ Sneak, Goldie Lookin' Chain, Nic Fanciulli, Louis Osbourne, Mutiny, Steve Lawler and a lot more. But it's perhaps on the DJ front that the brothers have made their biggest impact. With both Safe and Marko now based in Dubai, they hold down the most coveted residency in the Middle East at the much-copied but never bettered Nasimi Beach, a 5,000 capacity venue nestled on the edge of the seen-from-space Atlantis Hotel. Not only have they turned a once unremarkable patch of sand into a consistently sold-out club thanks to a soundstorm of beats and bass, they've played alongside (and often closed) for Faithless, Roger Sanchez, Derrick Carter, Armand Van Helden, Basement Jaxx and many, many more. Alongside that, the Marko and Safe played at their third instalment of Creamfields Abu Dhabi, dropped house bombs at Pete Tong's Wonderland, El Divino Ibiza, Savannah Ibiza and Hed Kandi parties in Ibiza, spun at the legendary Turnmills, Pacha London, Ministry of Sound, Moneypennys in the UK & Ibiza and the world famous Miami Winter Music Conference. The most recent developments might be the biggest yet: Smokingroove have compiled and mixed the first in a series of Pacha Dubai CDs, which are on global sale, while the duo have been signed up to represent Cafe Del Mar in the region, kicking-off a series of region-wide tours. Away from the clubs, the London-born duo are just as busy. With more and more chart-winning material pumping out of their smoke-filled studio, this year see's them investing more revenue into more and more studio equipment and a huge increase in tracks being released on their own Illuminati Records Imprint.