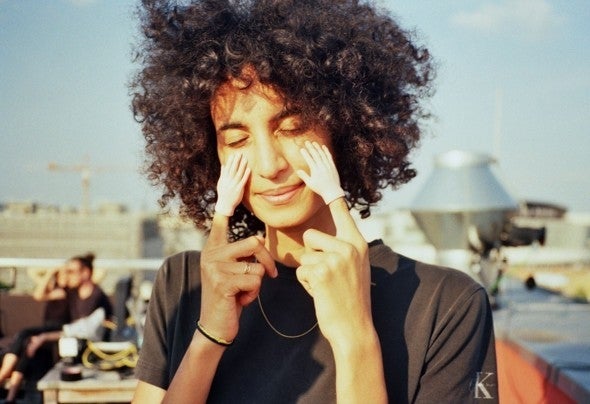 Sarah Farina sprinkles positivity over the darkest bass. She’s innovative, she’s skilful, and she’s the smiling antithesis of genre cliques and sour scene elitists. What you hear is all you need to know. And what you’ll hear from Sarah Farina’s sets is seamlessly blended bass-heavy footwork and futuristic beats, with fearless forays through R&B and UK Funky. It’s inclusive, forward-thinking and unrestrained. It’s a genre-rejecting style that she’s named rainbowbass. Led by the early releases of Aphex Twin, Timbaland and Boards of Canada into the dark clubs of Berlin, she was a driver behind the 2010 formation of Through My Speakers. The event production collective has grown to become a burgeoning record label, thrusting underground producers and DJs onto the decks of progressive club nights and the playlists of bass fans across Europe and beyond. Her position as one of Berlin’s premier DJs is cemented at her regular night Rec Room at OHM with DJ Uta and Kepler, and enforced by her work behind the scenes at New Forms at Watergate, a collaborative endeavour she runs alongside DBridge, Kabuki, and a number of artists from her Through My Speakers family. Sarah Farina is recognised and revered by the best of her bass music contemporaries, with connections to crews worldwide including Teklife, Hyperdub, Deep Medi, Buraka Som Sistema and Exit Records. Capable of holding her own in line-ups alongside artists as diverse as DJ Storm, Laurent Garnier, Om Unit, Kode9, François K and Lunice, her sets unite the dance-floor, equally impressive to industry insiders and those who just want to dance. A listen to any of her three acclaimed Boiler Room sets will demonstrate why she’s captured the rapt attention of tastemakers and influencers the whole world over. A DJ with tighter-than-a-drum mixes and flawless selections is hard to find. You just found one.