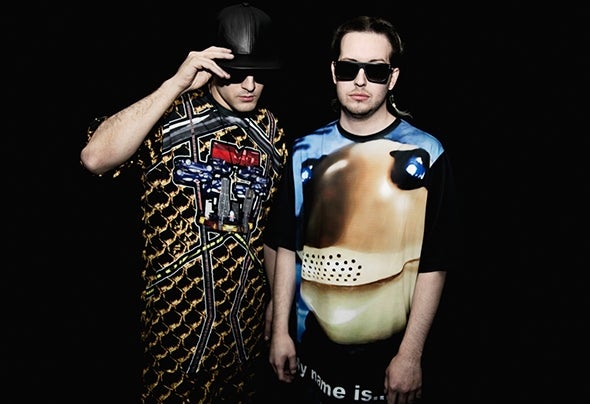 With one full length album and over 70 remixes and 500 gigs behind them Designer Drugs have been destroying venues across the world since they began the project in 2007.After their enormously well received debut album, “Hardcore/Softcore,”(Ultra Records) entered the top 10 on iTunes in 2011, Designer Drugs smashed the A-list club and festival circuit worldwide harder than ever before. Captivating audiences with their unique style, energy, and musical prowess, the New York duo consisting of Michael Vincent Patrick, and Dr. Theodore Paul Nelson, demonstrated an unmatched ability to bring the performance and rile the crowds and earned them the title of Americas #10 best Dj's by Technique. They have set foot in nearly every part of the world - performing in six out of seven continents. In late 2012, the boys released two remixes, now turned collaborations, offering a glimpse into the future of Designer Drugs. The first, Joachim Garraud + Alesia - Atrium, followed by their remix of Audrey Napoleon's - Poison. These remixes, however, are only a small preview of what’s to come.Already sitting on top of their empire, which includes Sex Cult Records and a very extended mix series know to the fans as "DATAMIXES", the duo returns with a release that is sure to smash up the scene from Capetown to Alaska. The title of this contemporary musical masterpiece, “The Drugs Are In Control,” reflects the fact that Designer Drugs are here to stay and with more control in the continuation of their intoxicating crusade. Evident on this release is the evolution of their already 'unique' and 'ahead of the time' sound, having taken on new heights and new production techniques. While they still offer everything fans loved from their old originals and remixes. The new tracks are sure to insinuate riots at festivals worldwide.