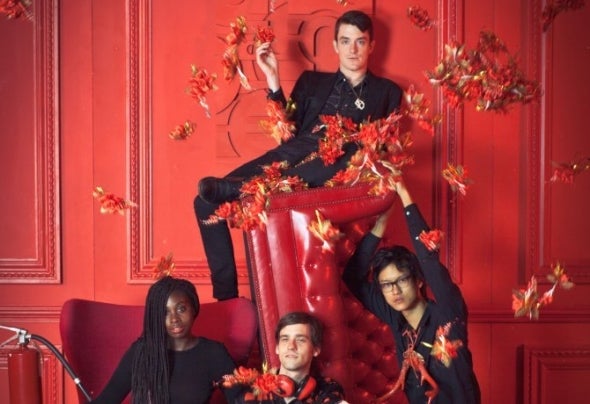 Fresh off the success of last year’s Social Studies LP —which earned the approval of everyone from NPR to The New York Times to The Guardian, who compared the breakout release to early Madonna, the indie disco of Prelude Records and “CSS doing an impression of Dr. Buzzard’s Original Savannah Band”—Body Language have ret urned wit h a new EP (Grammar, due out through OM’s Lavish Habits imprint on September 18th) and a full-length disc that’s set to drop in early 2013. Both of which streamline the Brooklyn quartet’s restless pop experiments with a future-shocked blend of soul and R&B.Or as multi-instrumentalist/producer Grant Wheeler puts it, “Our world still exists in an indie-disco bubble; we’re just pushing the limits of every genre to a point where the bubble’s about to pop.”That’s certainly the case with “Lose My Head”—a floor-filler that’s driven by late ‘70s funk licks and diamond-encrusted keys—and the rest of Grammar for that matter, from the soaring harmonies and glitter ball grooves of “The First” to the wobbly synth lines and Motown-schooled choruses of “I’m a Mess.” The latter is a perfect example of Body Language’s creative process, which often starts in the home studio Grant shares with singer/fellow producer Matt Young, only to be fleshed out even further with drummer Ian Young and singer/glockenspiel player Angelica Bess.“Everyone has their part,” insists Matt. “In fact, certain people come to our shows to see different performers. I kinda like to think of it as a circus.