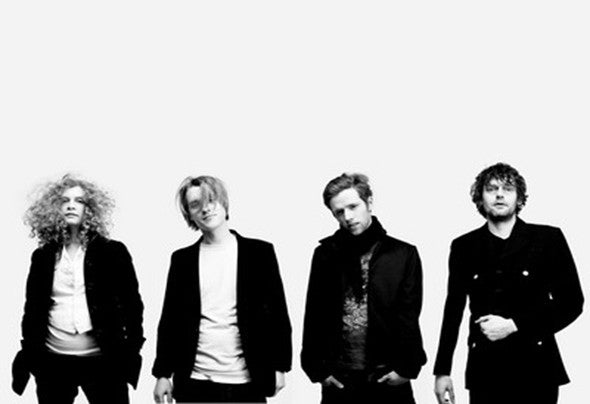 From its founding in 2000, Blue Foundation, the brainchild of Danish artist, producer and multi- instrumentalist Tobias Wilner, has dazzled with tunes ranging from pure shoegaze (“Stuck In A Hard Place”) to experimental and trippy (“Ricochet”) and even sultry (“Sweep”). Since 2008 their line-up has consisted of Tobias Wilner (producer, multi- instrumentalist and vocalist) and Bo Rande (multi- instrumentalist). Blue Foundation’s music brings to mind elements of dream pop, electronica and shoegaze. After leaving home at age 17, Wilner moved around restlessly between London and Copenhagen, living at times with friends and in artist colonies. Since 2010 he and his family have lived in Brooklyn, New York. From the early years, Wilner made a living DJing and composing music for contemporary dance performances and art films. Blue Foundation had its beginnings when Wilner had an idea for a creative musical project that included collaborations with other artists, and he was influenced by The Fall’s Mark E. Smith’s method of constructing a band. “You work with the people you're inspired by. If you get bored, change the members,” Wilner has said. The band’s line-up has changed quite a bit over the years and for Wilner, it's a way to make sure that he is always is developing as an artist. Since releasing the first 7” in 2000, and the self-titled debut album shortly thereafter (via Moshi Moshi Records), Blue Foundation has worked with artists as diverse as DJ Krush, DJ Tatuki Oshima (who was also a member of the Blue Foundation live band), Mark Kozelek (Red House Painters and Sun Kil Moon), Jonas Bjerre (Mew) and Bo Rande. The second album, Sweep of Days arrived in 2003, and Life of A Ghost was released in 2007 on EMI in Scandinavia, and worldwide in 2009 on Astralwerks. The next installment from Blue Foundation is an otherworldly collection of spacey, melodic songs with dreamy vocals and groovy, distorted bass lines entitled In My Mind I Am Free. Containing collaborations with Sara Savery, Jonas Bjerre, Findlay Brown and Cokiyu, the fourth album from Blue Foundation will be in May 2012 on DPC Records. Over the last several years, Blue Foundation’s music has been featured in major films such as Twilight, Miami Vice and in the television series "The O.C.," "So You Think You Can Dance," "CSI:Miami," and "The Cleveland Show.” And naturally this has lead to an expanded fan-base with the band now being embraced by both the indie-underground and the alternative mainstream. In 2009 Wilner founded DPC Records in Copenhagen, mainly for the release of Blue Foundation material, as well as that of his other projects, Bichi and Ghost Society. In April 2009, the Twilight Soundtrack, which included the band’s song “Eyes on Fire”, was certified double platinum. Additionally, Wilner recorded the Blue Foundation song "Watch you Sleeping" with singer songwriter Mark Kozelek, which was released as a single on DPC.In 2011, Blue Foundation contributed two songs for the soundtrack of the award winning documentary film Tankograd. by director Boris Bertram. Signaling a change in female vocalists for the next Blue Foundation record, one of the songs featured lead vocals by Sara Savery (Ghost Society and People Press Play). Another of Wilner’s great passions is skateboarding, which he took up at the age of 10. This led to Blue Foundation composing the soundtrack for the short film Go All Day, featuring professional skateboarder Chaz Ortiz. The film was directed by Steve Berra and Colin Kennedy and produced by Gatorate and The Berrics. The score was later released as the Blue Foundation single "Red Hook" in cooperation with The Berrics and DPC Records.