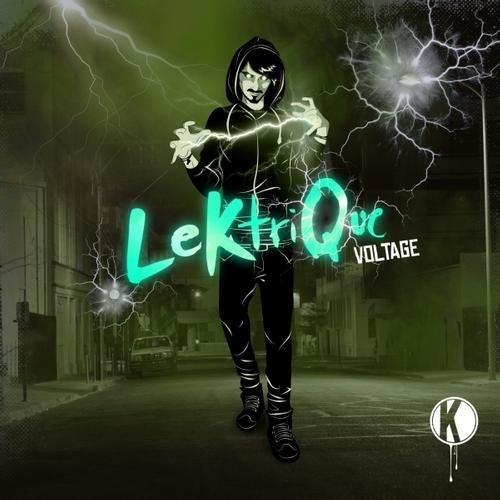 Voltage is the story of LeKtriQue, a boy born with the mysterious power to generate and control electricity. His family, fearful of his strange powers, cast him out at a young age, and he grew up wandering through the wilderness, hiding near power lines and electrical dams as he sought to master his abilities. When the Kannibalen virus appeared, LeKtriQue found that he was immune to the terrible infection. Suspecting that the virus and his powers might be related, he decided to seek out the evil Dr. Kannibalen to find an explanation for his condition. Voltage is a new EP by Belgian producer LeKtriQue, featuring three original tracks and two remixes. The title track, Voltage, is a dubstep anthem in the true sense of the word, deftly moving between rising synth sections, catchy vocal hooks and massive bass drops. The next track, Ampere, has a similar anthemic quality, pairing electricity-themed vocal samples with a pounding four to the floor electro house beat. The final original, Electric Field, sees LeKtriQue team up once again with Belgian compatriot Apashe. After the chart-topping success of their first collaboration, Jesus Christ, the two are back with another electro banger featuring vocals by the Lizzies. The EP is rounded out by two remixes of Ampere by Kannibalen producers Dabin and Kai Wachi. Dabins dubstep remix features his signature mind-bending drops, while Kai Wachi gives the track an electro trash twist. Distributed by Label Engine - www.label-engine.com