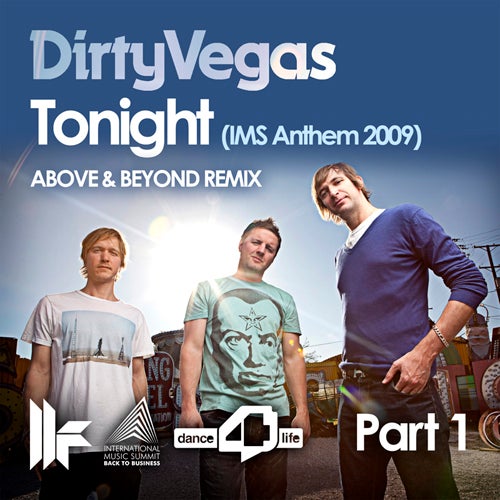 Held annually in Ibiza and co-ordinated by Radio 1’s Pete Tong, the International Music Summit is a high-profile music conference for the global dance industry. Incorporating the Dance4Life charity, which is an international initiative set up to involve and empower young people all around the world to push back the spread of HIV and AIDS. A percentage of the proceeds of this release will go to the charity.
Taking the baton from Tom Middleton following his 2008 creation, Dirty Vegas and Above & Beyond stepped up to the plate to create the IMS 2009 Anthem. Dirty Vegas developed some ideas and then constructed the anthem live at the IMS summit before handing it over to Above & Beyond, who remixed the track in just 24 hours, again this was done live at the summit. The package will now see a full release on Toolroom Records featuring a Radio Edit from Mark Knight & Funkagenda and a deep house mix from Matt Masters of Freerange Records fame.
The Dirty Vegas idea behind the track was to connect it to the mystical isle of Ibiza. The Original vocal mix representing the daytime vibe, infusing lush summer chords with Steve’s sublime vocals relating to the thought process of “Tonight’s the night my friend, I got this feeling that I hope will never end”. Above & Beyond’s mix takes you to the ‘Afterdark’ side of the island, still retaining that summer feel, but moving onto the clubs to let loose on the dancefloor and party all night long. While Matt Masters mix, with its subtle synth and rolling bassline, bridges the gap between the other mixes, creating the perfect soundtrack to getting ready to go out for your night ahead.
Check out video footage of Dirty Vegas and Above & Beyond remixing the track live at the IMS summit:http://www.youtube.com/watch?v=SuI_qVieOwc
http://www.youtube.com/watch?v=FT3z3e40u6c
http://www.youtube.com/watch?v=E1BpvApFy5s