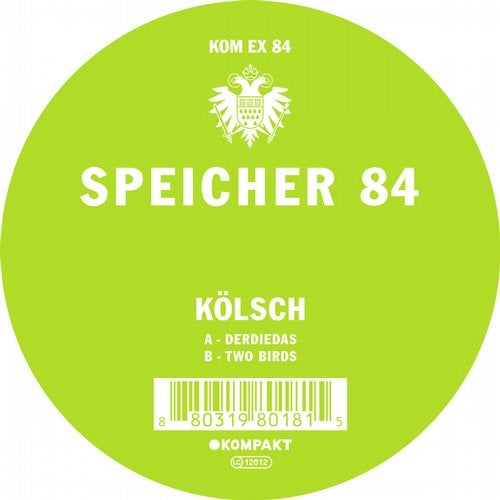 Starting out in 2001 to tie up some loose ends from our regulars, SPEICHER has since become a guarantee for vanguard dance sounds from all over the planet, allowing KOMPAKT to invite and support electronic artists that comfortably inhabit both the delicate and the more deliberate ends of the electronic music spectrum. For SPEICHER 84, Danish mastermind and global fan favorite KÖLSCH returns to the label that started it all (or at least his best-known monicker), delivering two heroic techno cuts whose electronic grandeur is only rivaled by the sweetness of their melodies. The fifth SPEICHER release from Rune Reilly KÖLSCH comes after the face-twisting madness of "Loreley" (KOMPAKT EXTRA 68), the piano-driven melancholy of "Opa" (KOMPAKT EXTRA 70) or the bestselling chords from his collaboration with Gregor Schwellenbach (KOMPAKT EXTRA 79), somehow paying tribute to all of these within the confines of one admittedly massive two-tracker. Rune's first new original material in a while, these cuts follow much-acclaimed remix work for artists from the whole gamut of contemporary music, from high-profile pop stars like Coldplay to purveyors of fine house Monkey Safari or bass music aficionado Henry Krinkle. With a particularly brimming event schedule in the last few months (including much-lauded performances at DGTL Amsterdam, Fabric London or Miami's Winter Music Conference) and no evidence of this train stopping any time soon, it's a bit of a miracle that KÖLSCH still finds the time for actual producing - but with new tracks like the epic DERDIEDAS or the immersive TWO BIRDS, there's certainly no need to worry for future prime times. When Rune's bias for cosy, playful melodies collides heads-on with the stirring thrust of his beats, there's magic to be had. For fans of his highly praised long-player "1977" (KOMPAKT 276 CD 107), it should be noted that these cuts also serve as primer for upcoming album "1983" - another modern classic in the making.