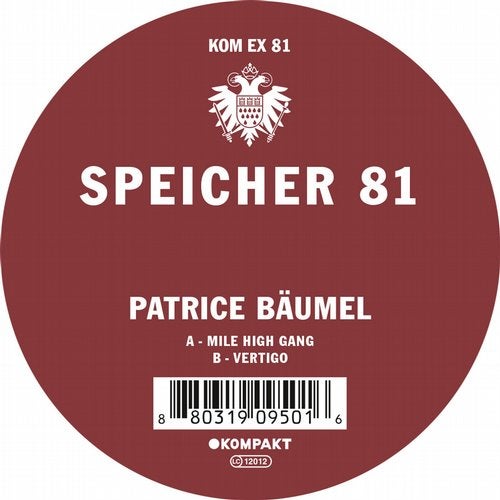 Starting out in 2001 to tie up some loose ends from our regulars, SPEICHER has since become a guarantee for vanguard dance sounds from all over the planet, allowing KOMPAKT to invite and support electronic artists that comfortably inhabit both the delicate and the more deliberate ends of the electronic music spectrum. For SPEICHER 81, Amsterdam-based DJ and producer PATRICE BÄUMEL presents two adventurous minimal epics with decidedly mind-bending propensities. As a long-running resident DJ at Amsterdam's renowned Trouw club, PATRICE BÄUMEL certainly knows how to draw in a crowd, having proven his skillful approach to hypnotic techno time and time again, as an impeccable host as well as an internationally acclaimed guest DJ in the world's leading venues. Just as his DJ sets, Patrice likes to infuse his own music with raw energy and a sense for sonic adventure - MILE HIGH GANG serves as a perfect example for his credo, underpinning its vibrant synth sequences with a meticulously crafted - and intensely propelling - beat. The true mind bender, however, arrives with the flipside's aptly named VERTIGO, a deceptively simple, yet unstoppable son of a pitch shifter, cutting its way through spiralling serpentines in dizzying heights. Never one to let himself get bogged down by genre markers or scene compliancy, PATRICE BÄUMEL commutes between electronic factions with ease: he caters to a purist crowd as well as those in dire need of sonic surprises, giving both daydreamers and nighthawks something to rock out about.