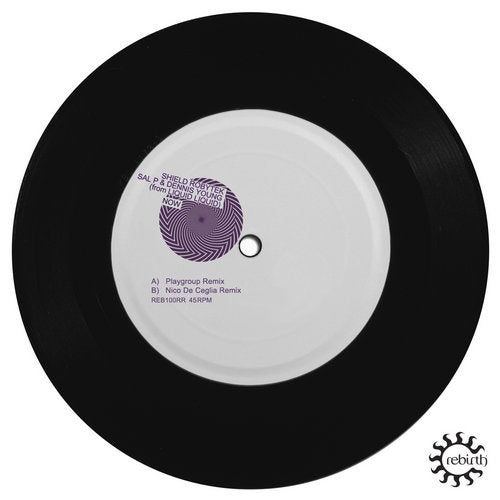 To mark the 100th release on Rebirth, label owner Shield and his 'right arm' Robytek got in the studio to create "NOW" with Salvatore Principato (Sal P.) and Dennis Young: the vocalist and the marimba/percussionist of the seminal early 80s NYC band Liquid Liquid. Known for their experimental and free sonic attitude Liquid Liquid emerged from the vibrant Downtown New York City's scene in 1981 introducing their own unique sound: a fusion of contagious fluid basslines, junkyard percussion and direct free-flowing lyrics. Liquid Liquids discography includes influential releases such as "Cavern" (notoriously sampled by Grandmaster Flash & Melle Mel in the making of the hit "White Lines (Don't Do It)"), "Bellhead" and "Optimo". The second part includes remixes from Playgroup and Nico De Ceglia. When Trevor Jackson heard the track he loved it so much that decided to do a remix and we couldn't have been any happier to get such a legend on board. Following up his recent critically-acclaimed series of "Previously Unreleased" EPs from Playgroup, Trevor offers this powerful version of "Now". Influenced by the hedonistic early days of house, disco, post punk, new wave, electro and dub his remix feels like a sensory overload of chemicals, acid bass, smoke, sweat, sex and hazards ! Nico De Ceglia takes inspiration from the singular spirit and rhythm of Sal P vocals and the punk attitude that was behind Liquid Liquid, delivering an interpretation with a fresh approach that doesn't follow typical standards building it around free forms and flow. A strong second part for this big release on Rebirth.