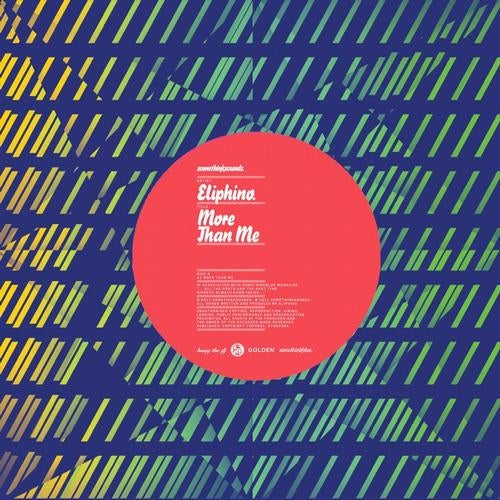 Following on from releases on Manchester based Hoya Hoya and Giles Peterson's Brownswood label, London based producer/dj - Eliphino - has found his finest form to date with this new EP 'More Than Me'. Low down, deep and dirty house music for the clubs, released on limited edition vinyl via somethinksounds. The full EP features three low slung dancefloor bangers - 'More Than Me', 'Devoted' and 'I-Played' - fuzzy, warm and atmospheric. Eliphino switches up the style but never fails to dazzle.

Eliphino has fast been picking up praise from some of the scenes most influential taste makers and producers. Aswell as support from Giles Peterson Eliphino's previous releases have made their way on to Zane Lowe and Mary Ann Hobbs Radio 1 shows and Mistajam's 1Xtra show and Eliphino can count Martyn and Illum sphere as big fans of his work. Eglo Records boss Alex Nut proclaimed this release was ''Head and shoulders above most of what else is out there".

Throughout 2011 Eliphino has been working hard, honing his craft and making a name for himself which has led to publications from Platform (who invited him to play in their infamous boileroom alongside Mosca, Rockwell and Thristian BPM) to XLR8R marking him out as one to watch. Jamie Hodgson (NME) said 'Let Me Love You Forever' was "one of the finest, most urbane songs I've heard" and NME recently named Eliphino along with Floating Points as two bright stars for the future.

Somethinksounds bring us this sterling release off the back of a sensational summer for the 1 year old label, having hosted tents and boat parties across global festival circuit and collaborated with Wolf + Lamb and Soulclap on their previous release, creating one of the biggest hits of the summer. The label is hosting parties in London, Paris, Berlin and New York as part of their forthcoming Birthday celebrations and Eliphino will be with them all the way.