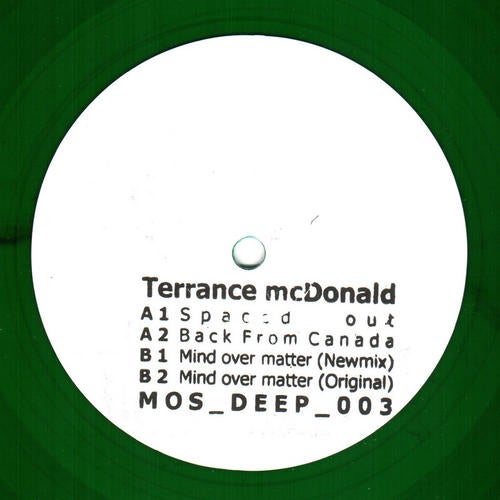 Collectors Alert! Repress of forgotten old school Chicago House jams. Originally released on Trax' sister Saber label. Remastered/recut, Comes with a Steve Poindexter edit. Real Chicago madness!! "This was my very first release (1991) and I was 16 at the time. Mind Over Matter was recorded at Hair Bear Studio in Alsip, IL with the help of my best friend DJ Skull. I used the legendary Roland 808, 727, 303 along with other vintage synths. The other two tracks - Spaced Out and Back From Canada were recorded in Chicago, IL at DJ Skull's home studio. The setup here was the Alesis SR16, Roland DR 550, and a couple of other Roland vintage synths. Through a lucky introduction through DJ Skull to Ron Carroll and Steve Poindexter who were working for Trax /Saber Records at the time, I was able to land my first record deal. Although this release was considered a success,(by Saber Records standards), I saw very little royalties due to the accounting malpractices often carried out by the label's owner Larry Sherman. Needless to say, being only 16 and hearing my tracks pumped on the radio and seeing it fly off the shelves in the stores was good enough for me!"