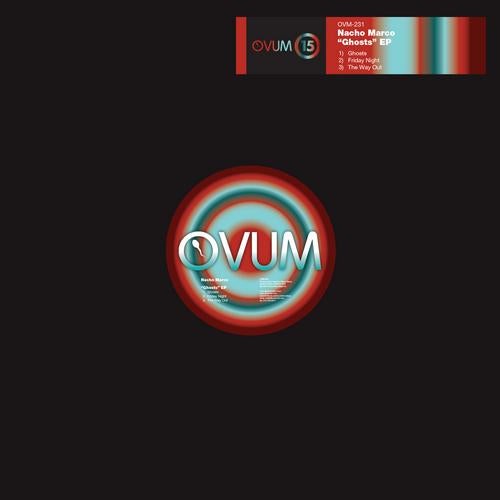 Nach Marco debuts on Ovum with GHOSTS. Born in Valencia Spain, Nacho Marco is one of the most respected djs and producers in the Spanish electronic music scene. Starting djing at the age of 15, Nacho has over 20 years of experience in dance music. Nacho started producing his first house tracks in 1999 recording for labels like Alola, Future Groove, and Shinichi. In 2007 he started his own label Loudeast Records with collaborations with The Time Writer, Terry Lee Brown JR, and more. Since it inception the label has worked with artists such as Fred Everything, KiNK, and Mark Broom. He has also branched out and done releases with labels like OM Records, Freerange, Plastic City and Pacha. His DJing has taken him to legendary clubs around the globe like Florida 135, Sub Club (Glasgow), The Loft (Barcelona), Space (Ibiza), Redlight (Parisa), and many more.Nacho delivers a very diverse three track EP that should find its way into the sets of many this summer. The EP starts out with the rocking Acid House influence title track Ghosts. Nacho then shows his diversity with the gorgeously deep B side track Friday Night with its undertones of acid. You can feel the warmth of the rising early morning sun in this track. He finishes out the EP with the grooving house vibes of The Way Out, which harkens back to his influence from his early house roots, but with a modern update. Let the music play!