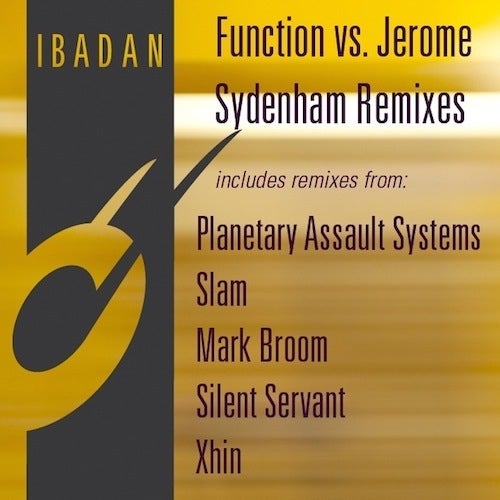 Function & Sydenham return again with an astronomical remix package. One of Ibadan’s most popular releases of 2010, resurfaces with three stunning remixes from a trio of artist who’ve been been defending the free world of underground Techno: Planetary Assault Systems, Slam, Mark Broom, Silent Servant and Xhin. 'White Light' was the track that had everyone believing their last breath was around the corner, so who better than Planetary Assault Systems to execute the rework. An easy task for a producer who is used to destroying entire planets. Silent Servant creates a nice plateau effect with his remix of 'White Light'. Instead of taking this one off soaring into another galaxy, he uses the stabs and pads to create slowly building set-up tune hypnotizing the crowd, before the next impending crushing blow. Singapore's most notable Techno talent, Xhin, takes 'Drift' into the direction of the unknown with a dark and eerie vibe, teetering on the edge of experimental. This isn't your typical left field fodder, as implemented by a tight structure and an even tighter bass rhythm that is capable of disrupting any clubs bass bins. UK Techno legend Mark Broom infuses his 20 years of experience into his remix of 'Drift'. Heavy use of 909 percussion strips the track back down to its bare minimum, giving it a rawness that allows the Detroit stabs room to take the track into deepest depths of the underground. A perfect rough alternative to the original. Ibadan's New Jersey stalwarts - Slam - spruce 'Drift' up with a boost of big room energy. Hypnotic arpeggios cascading along the ridges of the high charged beats and crisp snares, drive the track right into the red zone. A dizzying array of halls and effects keep it from completely overheating and undoubtedly make it a true piece of futuristic Techno, from a group that seems always to be a step ahead. An absolute top-shelf of remixers taking cracks at original tracks like these, undoubtedly makes this release one of this years' noteworthy events for the Techno lovers. For Licensing: info@ibadanrecords.com Published by Bodija Music Publishing P&C 2012 Ibadan Records www.ibadanrecords.com