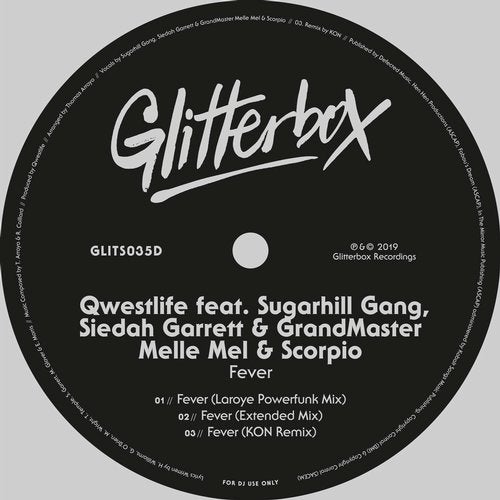 ?I've got these kids who can talk real fast,? was how record producer Sylvia Robinson described the Sugarhill Gang back in 1979, before their biggest hit 'Rapper's Delight' was recorded. Fast forward forty years, and the song transcends genres, tastes and generations. Perhaps this is why as 'Fever' comes through the speakers there is a warm feeling of familiarity that comes with it. The exceptional US talent doesn't end with Sugarhill Gang, as Qwestlife also enlist the help of Grammy award-winning vocalist Siedah Garrett and Furious Five members GrandMaster Melle Mel and Scorpio to bring together disco, hip-hop and soul on their latest output. Capturing the energy of a hot and heady dancefloor, 'Fever' makes a perfect follow-up to Qwestlife's previous Glitterbox releases, as the duo continue their tradition of crafting great dance records with traditional analogue techniques. Opening with Laroye's Powerfunk Mix, the groove continues with the Extended Mix of the track, finally the release closes with disco edit royalty KON's remix, silky-smooth and instrumentally led, the Stateside producer's mix is destined to blissfully float across the dancefloor.