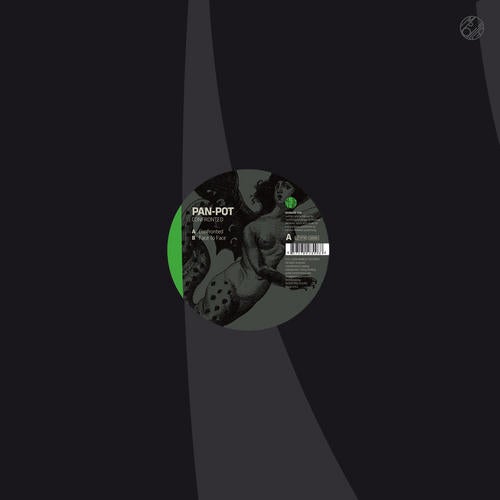 It’s been a while since the bad boys of impassioned, pitch-black techno behind classics such as “Charly” and
“What is What” and Pan-o-Rama, the stunning debut artist album on mobilee, have released any of their own
productions; but don’t let that fool you—Pan-Pot is back with a vengeance on their newest release for mobilee,
Confronted.
The artwork for Confronted is particularly indicative of the sonic path the duo have chosen to forge: a mythical
mermaid, simultaneously sad and beautiful, has been darkened to the point of barely being visible. While the dark,
almost gothic qualities to the image suggest that the duo have maintained the shadowy, hard techno sound that
they made their names with, the presence of a creature as sensitive as a mermaid is indicative of their willingness
to expand the components of their productions, all the while staying firmly rooted in what they do best: colossal,
haunting techno tracks overflowing with noise and static, throbbing bass lines, and epic builds that manage to be
both tasteful and restrained.
Whereas “Charly” saw Pan-Pot using vocals to make a near-funereal track even more somber, the use of vocals on
“Confronted” have an almost opposite effect. The deadpan delivery of the spoken word courtesy of Eva Padberg
adds to its frigidity, balancing out the waves of static, rolling bass lines, and stabs of synthesizer until the vocals are
hacked to fragments and seamlessly integrated into the track’s overall soundscape.
“Face to Face” is ultimately a metallic track—everything from the sparsely placed percussion fills and stuttered
melodic tones to the hashed vocals have a distinctly piercing and noisy texture that feels perfectly at home
alongside thunderous bass lines and exploding waves of pandemonium that rush over the listener.
Digital exclusives “The Birds” and “Diamond Head” have ambiences comparable to the A and B sides—
effective use of background static and vocals chopped beyond all recognition—but build on these tropes with the
use of curious sound effects and the foregrounding of melody respectively