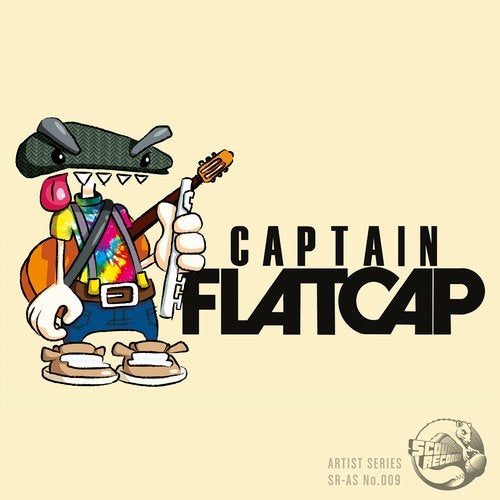 A long time ago (Saturday 9 February 2013 to be precise) there was once a Valentines Snow Ball, held at a crazy venue called Bristol Townhouse. The gig was great fun - albeit a tad on the quiet side - and upon the bill was an up n coming three-piece band named Captain Flatcap. It was here where chief squirrel Spinforth and blurb master Fat Harry first heard these Flatcap gents doing their awesome squelchy swing, ska, funk, folk, gypsy, vintage remix'y thang, and instinctively considered them promising talent to watch...a nut was sown. Fast forward nearly 4 years and Captain Flatcap have well and truly blossomed. With several EP releases (courtesy of Rocstar Recordings) under their belts and a plethora of memorable UK festival appearances, the time hath come for them to proudly unleash their self-titled debut LP unto our ears and crates. Not only a first for them, but also for Scour Records - as this LP marks the first full length Artist LP that we've been granted the honour and pleasure to release. With collaborative tracks featuring legendary rap duos Too Many T's and Great Scott, vocalist Isabel Drake and glitch-hop connoisseur William Breakspear, the debut album truly establishes Captain Flatcap's skills and diversity. There's something for everyone - with the Spanish guitar + ska + DnB party antics of 'Are You Me?', the Russian mandolin electro voyage of 'Sergei's Journey', the trademark Flatcap electro swing sound of 'Coconut Affair', and the down right gorgeous filthy squelchy glitch of 'Awakening' - as you'd expect the album shows off a multitude of instruments, including their distinctive flute and trumpet parts, and features an intriguing blend of genres and tempos. The group’s unique and barmy sound is best left to your own ears to comprehend – words are simply useless in the matter! Bass-faces at the ready! Time to get your 'Captain Flatcap LP' very on!