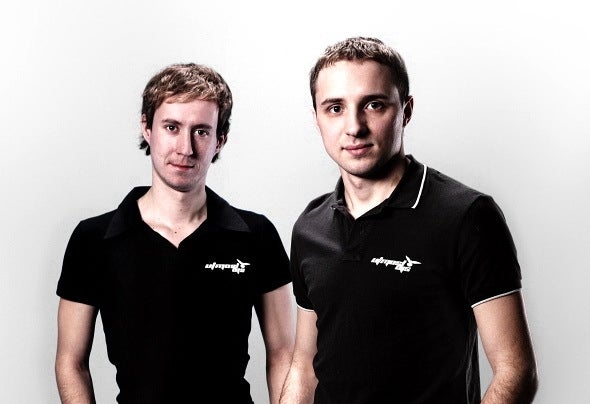 Utmost DJs have begun the career in 2003. Michael Sharonov has started to embody the dream to be DJ in 13 years, working in children's camps. And then starts to try the forces in creation of own tracks. Evgenie Fedorov a.k.a. DJ Kolychiy has begun the career by the dancer in night club. Rhythm innate sense has allowed it to "draw" precisely and expressively music body movements. Soon it have noticed and have invited to work - and the people have received Evgenie in new role - DJ Koluchiy. Having heard Michael, Evgenie's its creations suggests to change some moments in arrangement. The result was so shaking that guys have decided to unite the forces in a musical duet. So extraordinary harmonious and unpredictable symbiosis called as Utmost DJs ("utmost" (English) - "limiting, the highest") was born. The chosen name as well as possible has reflected an essence of the project and its creativity. And it is fast enough, living in the closed small town, Evgenie and Michael have safely declared itself to all Russia. Initial style of their creativity - Breaks. In 2006 their tracks have simply excited dancings across all Russia, and dryish mini-electro-sounding at that time became their card. However, acquaintance and cooperation with DJ and the musician from Miass Evgenie Semenovym, has changed the basic direction of style aside Electro House. Three years of fruitful work in the given direction has allowed children to rise firmly on feet and to find popularity in all clubs of the Ural region. Besides, professionalism of a duet and exclusive sense of taste in music have been estimated by foreign labels, thanks to the contract with which products Utmost DJs sound now and in clubs of the Western Europe. The project has reliably affirmed in the world market of House-music as highly claimed a house продюссеров. Since 2007 Utmost DJs become residents of well- known project Setka Dance Club. And to this day are one of leading and most favourite actors of the Grid, winning hearts of inhabitants of clubs and winning all new and new admirers. Here they act on one scene with such stars of electronic music, as: Vincent Vega, Sven SvenSon, Hi_Tack, Niels van Gogh, Swen Weber, Thomas Gold, DJ Sergeev, Andrew Freak, DJ Andrey Vakulenko, Joseph Armani, Wonderland Avenue, Slava Shelest, Moonbaem, Swanky Tunes and many other things ... Utmost DJs successfully act on various actions, collecting thousand people on dancings and scale Open Air's, and constantly receive invitations from the Russian and foreign clubs.In 2011 with Evgenie Bardjuzhi's support, Utmost DJs start own label UTMOSTONE Records.