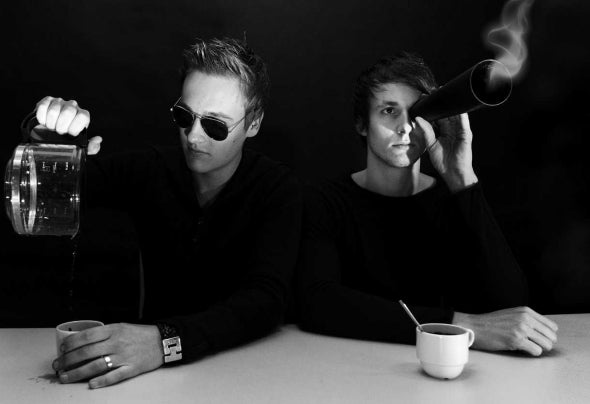 Bas Somers (1984) and Stijn van Oorschot (1984) started their collaboration at spring 2008 after both being solo for some years. Bas Somers started his musical crusade super low budget when he was 10 years old, recording different sounds and layers from cd to tape. In 2004, after using various mixing software, he started as a DJ mainly playing Electro, House and Tech-house in different clubs national and international. Stijn van Oorschot had his first musical awakening in 1996. Having played the drums for several years, being in different bands and getting experience with different styles of music, he first came in touch with the dance scene in 2002. In search of his musical preference he tried out various instruments, drum computers and programs all leaning towards the electronic music. After they both came back from their foreign trips they thought it was time for a change. They began a partnership, both sharing the same passion, skill-set and ambition for electronic music. Inspired by different names in the Techno scene as well as various influences from, House, Progressive, Electro, Pop, Rock and Hip-Hop they rapidly developed their own style and musical taste. In their own tracks they try to make a mixture of different styles and influences, a sound that’s recognizable and reflects the same energy and passion that Minilab wants to project. This all results in releases on well-known techno labels like; Kne’Deep Records, Fone Audio, Jeton Records, Repressure Recordings and many more. Minilab behind the decks when playing in front of the crowd is not “back to back” but better to describe as “side to side”, four hands working the knobs! With multiple decks and a set that takes you on a journey from the beginning till the end, they are on a mission to give each and everyone a heck of a time.