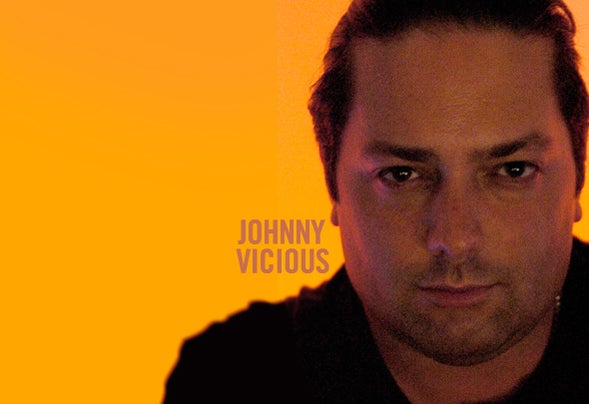 Whether he's wreaking havoc in the DJ booth or in the studio, Johnny Vicious has made an indelible mark on the world's dance floors and is regarded as a turntable phenomenon as well as an invincible producer and remixer. He is without question lauded internationally as one of dance music's brightest stars. The particular style that he has perfected over the years has propelled him into a class of his own. Prior to achieving worldwide notoriety Johnny's roots date back to New Jersey where he was born and raised. As a child he initially favored Rock music but began toying with a pair of turntables and became instantly enamored with dance music's sinuous energy. The underground sounds coming from Chicago based labels such as DJ International and Traxx continued to fuel his burning passion for the music. "It's Funny" Johnny laughs while recollecting his progression "one minute I was into Motley Crue and the next I was listening to Tony Humphries mix show on Kiss-FM. I started DJing in my friend's basement, and I didn't know what I was doing. It sounded like trains crashing" Johnny's mixing skills quickly improved and in 1989 earned a slot spinning at Manhattans famed Palladium nightclub; his first Big Apple show DJing with the Legend Larry Levan live on Hot 97. From then on he never looked back. Appearances at the most legendary clubs in N.Y.C. like Red Zone, Palladium, and Sound Factory followed and Johnny parlayed these gigs into a residency at the world renowned Roxy declaring that Johnny Vicious had finally arrived front and center. Soon after, Johnny collaborated with Sound Factory Bars Jeffery Rodman and created Vicious Muzik. They both paved the way for Johnny's seminal Liquid Bass EP, showcasing his m�nge of beats and samples that established him as one of the most promising rising artists in dance music and put him on the map worldwide. Phone calls and Faxes are rolling in for him to play at the worlds best clubs from Europe to Japan and Down under in Sydney vicious was unstoppable Johnny Vicious has been one to simply let his music do the talking, but if he were adamant about one thing it would be his forward-looking vision of dance music, which rails against stagnation and thrives on pushing the envelope. His relentless production touch has been felt by pop notables such as Whitney Houston,React,Chicane, Amber, Filter, Simply Red, Aretha Franklin, Deborah Cox, Jimmy Sommerville and Kristine W as well as underground legends such as First Choice, Lolleta Haloway, Karen Finley and Shades of Love. His unique combination of house, trance and eclectic vocals provided a recipe for success producing chart-topping hits such as "Ecstasy" Featuring Lula, and "Moments" Featuring Myndy K.This contributed to him securing his own mix show on New York Citys biggest radio dance station WKTU where he was heard breaking his newest remix and productions on Saturday Nights.That soon Led him to residency's at Sound Factory,Tunnel,Exit from which he started one of the most successful parties in NYC on friday nights... "Sexy At The Roxy" with local star promoters A-luv and Bobby Goodrich. As if his schedule wasn't busy enough. He opened up a record label simply named VISH Records for the more commercial sounds and Warehouse records. The labels include his own productions and also the sounds of Masi and Mello "Bang-04" and DJ Exactas LXC "Like You", the VISH label also highlights further productions from unreleased material and fresh new sounds. Johnny was also a big part of the Ultra Records family where he mixed four of Ultra's top selling CD's Ultra Dance 01, 03, Ultra Trance 03, Ministry of sounds "Club Nation", and Clubbers Guide. selling over a million CD's Aside from the Ultra releases the first installment of the Deeper And Harder" compilations was also released on Dee Vee. "While I'm doing major-label mixes, I still want to keep myself in the underground." affirms Johnny. "As a DJ, I always want to hear new records, and as a producer, I always want to make new sounds. I don't want to get away from this music. Dance music will always be around, and I'll always be a part of it."