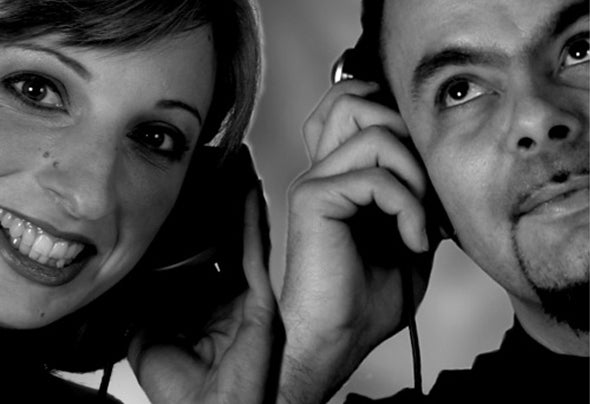 Dinsher and Husler is a DJ and producer team that their passion has found in the electronic music. Of strong character-pulsating sound is the main thread in their common DJ-sets and productions. Together with Jörg's brother Danny D. the trio owns the Würzburg Label Scandalrecords. Since 2004 exists the stable musicians-alliance and offers the audience inovative crackerjack-sound in their residency: at the legendary Airport in Würzburg. With own series of events -“Air-Rektion”,“ON AIR” and “Scandalös” they have created a space for a free development of individual sound for innovative musicans, fresh artists and the Scandalrecord-artists themselves, and a home for the electronic underground music-scene in Würzburg. Jörg Dinsher found his roots in the electronic music in 1998. With multifarious resident jobs in clubs, lounges and open-air bars he inspired a large scene-audience. In 2003 Julia Husler found her place behind the turntables .Already at the beginnin g of her career, several resident-jobs turned it to a professional level. By the momentum of Würzburg`s club-scene- Jörg and Julia realize, that they speak the same musically language. The reactions from the public to common performances-dawn on the two artists, which fascinating effect arises from the mixture of their music. “Let's do it!” - A bold parole in the beginning increases to a recipe for success. In their recording studio, madame and monsieur constantly and diligently create their new scandalrecord tracks. Their collaboration is an inspired combination: self-confident, balanced and interlocking. Julia Husler impresses with huge and founded knowledge in filigree midi-bricolage, imaginative arrangements and compositions full of increasingly tension. She is a software- producer and Plug-in Pro. Completed by Dinsher: he has a huge ability of a hardware specialist, mixing his own tracks for vinyl productions and impresses with sensational bass- and beat- construc tions. Conducted by musical instincts, technical sensibility and electronical passion, the artists create fresh “Scandal”- sound with a breeze of: “We do not know where the fun ends.” It is a pleasure to witness how Dinsher and Husler live out their music.