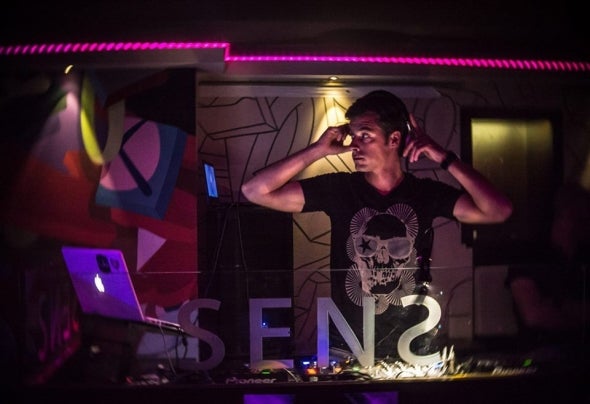 Born in 80, raised with The Mercury, The Beatles and The Floyd, Day has his first meeting with electronic music in 96 during the techno parade in Paris ; garnier, carl cox, manu le malin.With a really good listening and a keen research of the music he loves, he founds his mentors as dave clark, Richie hawtin, anthony rother and stéphane bodzin.His quest for a certain texture and a cleanness of the sound reveals his own caracteristic.His music – deep bass and sustained first line, heavy kicks, dark music interspersed by transversals floating and lively sounds, eclectic clean instinctive and advanced creativity – is a great pleasure of a return to the sources in an actual modernity.After having organized parties in the Nantais background : Op2n parties with Tom Pooks, Mitch and bunch of dj’s, He makes his first weapons as a resident DJ at « La Route du Rhum » (OP2N party) and gains recognition of his skills through the House Sunshine parties.By this experience, Emilien gets more sensible to what links a Dj and his audience. He works non-stop to improve his own technique and style.First moving to la réunion in 2004 for few months where he mixes for Freebasse party with anthon X and Oxia.Day return to France for a season !!! keep one hand on the mix with the sets at the Bing Bang bar and the Energysud parties with Volverine and Laurent N.Moving another time to La Réunion in 2008, he organizes the programme planning at « la Planche Alizée » and plays for the Onecheez party of Copacabana and in after for the coming of Arnaud RebotiniRadio sets in live on Teufin radio !!He takes the plane to Nice to concentrate on what he likes best composition.Mus icalement