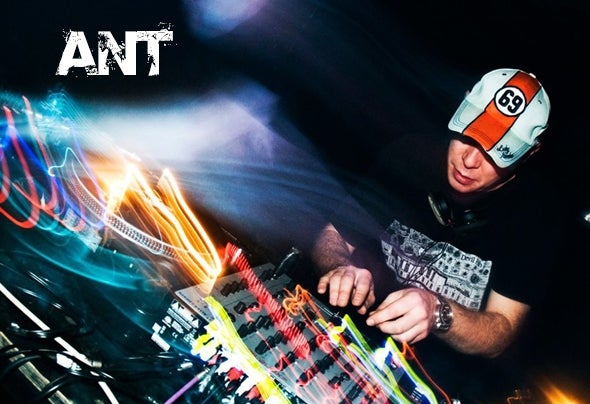 Ant is a DJ and producer from London whose career in electronic music began 2 decades ago by regularly DJ'ing at warehouse parties and playing on the underground sound- systems that were so popular in the early to mid 90's. Producing techno, tech-house and acid records was the logical step forward in establishing himself and he achieved this by becoming the in-house engineer at Kinetec Studios, the noisy room out the back of the infamous Kinetec Records in London's West-end. It was here that he started his techno based imprint, Powertools, featuring artists such as Lenny Dee, D.A.V.E. T he Drummer and Chris Liberator. Over the following years, his discography grew into the 100's, not only releasing on Powertools but many other flagship labels such as Stay Up Forever, Hydraulix, RAW and Cluster and it was some of these tracks that were being played by artists such as Carl Cox and DJ Rush.Time was divided up between the studio and travelling the globe many times over, showcasing the latest releases of that time at events ranging from small underground clubs to infamous and prestigious events in venues such as Florida 135 in Fraga, Mother Hall in Osaka, Tuning Hall in Moscow, Lov-e and Clash in Sao Paulo and many more.As the digital revolution crept in, essential replacing vinyl as the preferred format, Ant found it more and more difficult to get good new music on vinyl. The decision to switch to digital was simple and he opted for Native Instrument's Traktor combined with the S2 and X1 controllers as his preferred DJ set up.Currently,Ant continues to produce fresh new material in the studio, fully embracing the modern style of techno and tech- house that is around today and still travels the world extensively, flying the flag for new and exciting electronic music.In 2013 Ant revived his old techno moniker, Chicago Loop. Ant uses this alias when representing techno that's slightly different to what he would normally be known for, whether it's deeper, darker, slower or just a bit more leftfield.