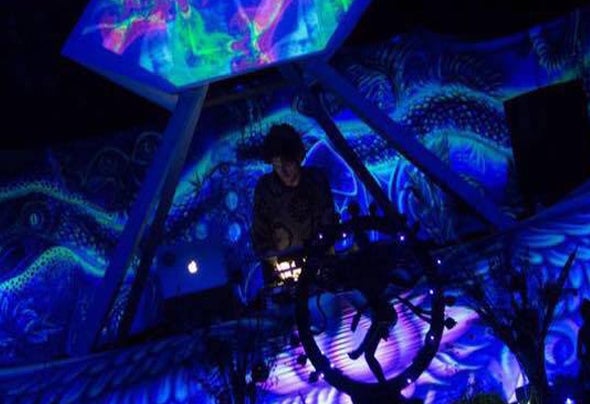 "Andreas Maida AKA Flix At the time, he wouldn’t have guessed his passion for creation and thus becoming Flix, a psychedelic/techno musician, would have begun when he discovered computers at a young age. Living in Chile at the time, proper computers were hard to come by and expensive. For most that posed a problem, but he overlooked computers and the potential to build his own. In the early 2000’s Andreas discovered the music production software EJay and CoolEdit Pro which allowed him to produce hip hop tracks for himself and friends. In 2006 he fell deeply in love with electronic music at the Earthdance festival in Chile, opening his mind to a new world full of sounds he never heard before. By 2010 he started producing his own music under the name Andyip. All the while he was collaborating in the psytrance duo Reptilian Renegades while simultaneously playing the synthesizers for the psychedelic rock band Spiral Vortex. Having a natural ability to observe how things were built, it was easy for him to transition into woodworking and carpentry. He graduated high school early and began freelancing his skills as a Designer, creating magical scenes such as life-size models of winter wonderlands. Building and decorating, for example, Santa’s sleigh, Elf homes, and functioning model trains. Andreas was drawn to the natural world and considering his design experience studied Landscape Architecture. He also began working as a Technical Production Specialist, coordinating, setting up audiovisual gear, projecting movies and doing all kinds of tech work for the International Movie Festival of Valdivia, Chile (FICV) and the International Documentary Festival of Santiago, Chile. (FIDOCS) amongst others, giving him a wide appreciation for other forms of art and storytelling, and allowing him to rene in which ways he would continue developing his artistic vision.